"I am his whole world, and he is mine, so I am fighting this as hard as I can for him." Single mum Rebecca McQueen has been diagnosed with three cancers in one year, and finds more meaning than ever as a mother to Isaac. Photography: Green By Name Photography.

Rebecca McQueen lives in Siem Reap as a single mum to a beautiful boy with Autism Spectrum Disorder and ADHD. This year, she was diagnosed with three cancers, and is now in Bangkok fighting with everything she’s got. Here she shares how she keeps mentally strong, finds positivity and how motherhood is more meaningful than ever.

Parenthood is a rollercoaster: and all mothers understand that it can be relentless, with intense moments of joy in between. Now, take all that we know about motherhood, and put yourself in the position of a single mother. To a child with additional needs. And imagine being diagnosed with cancer, three times in one year. Motherhood is never the same in the face of serious illness. Aussie mum Rebecca McQueen is 39 and lives in Siem Reap with her ray of sunshine Isaac, who is five years old and has Autism Spectrum Disorder and ADHD. Earlier this year, she battled skin cancer, and was recently diagnosed with a rare cancer Adenoid Cystic Carcinoma, so has now uprooted her little family to Bangkok for treatment. Last week, Rebecca was also diagnosed with unrelated breast cancer, which has spread to her lymph nodes. Rebecca spoke to us about the greatest challenges and the small wins that mean the world – and what she’s learned about herself and motherhood as she fights as hard as she can for her son.

“I’ve lived a life of adventure. I’m originally from the Central Coast of NSW in Australia but in 2009 I felt there had to be more to life than a 9-5 job, so I signed up for a one-year volunteer position in Tanzania, not having even been to Africa before. It was life changing, and it was where I met Isaac’s father. I returned to Australia to give birth to Isaac and I’ve taken him back to Tanzania to meet his relatives since.

I did a lot of travelling while Isaac was a baby, as a way of escaping the isolation of being a single mum in a small town. While in Cambodia I met the inspiring founder of a not-for-profit Montessori school, and she offered me a volunteer role. We stayed at the school in Phnom Penh for six months before making a tree-change to the more sleepy Siem Reap. We are in our third year there, with no desire to move anytime soon. I now teach kindergarten at a wonderful school in a village outside of Siem Reap, and Isaac is happy attending the tiny French school where he has made some good friends.

When I got the cancer diagnosis, it was like it was happening to someone else. We went to Bangkok so I could have minor surgery to correct a jaw problem, but during surgery they found a tumour in my sinus cavity. A few days afterwards, the doctor told me that I had cancer while Isaac was running around the room, so I didn’t grasp the seriousness of it straight away. Now I feel terrified for my boy. I am his whole world, and he is mine, so I am fighting this as hard as I can for him.

Meditation, yoga, and practising mindfulness makes me feel mentally strong, and Isaac inspires me to be as strong as I can be. Isaac is coping far better than I ever could have expected. He has been truly amazing. For a child who struggles with extreme rigid thinking, he has shown flexibility and adaptability at a time when we both most need it. His coping mechanism is to create little rituals that he repeats every day; he needs those to feel secure, I think. Given all the change we have been through, I’m proud that he has figured out how to create his own sense of safety and security.

I’m coping much better than I expected too. Since the cancer diagnoses I have started learning to cook cancer-fighting dishes, and have discovered a love of cooking. So when Isaac goes to sleep, I go to the kitchen and absorb myself in the recipes and fill the fridge with nutritious food. It keeps my spirits up to feel a sense of ownership over my nutrition, and helps me to cope.

Eating is a challenge though. During surgery to remove my tumour, a section of my jaw and palate were removed, so I now have to wear a prosthetic jaw/palate plate. I also have inflammation from radiation, which makes swallowing very painful. Yet, I need to gain weight as I dropped to an unhealthy 42kg after surgery. It takes so much time, pain and effort to eat. It’s a huge struggle.

I do break down occasionally, but overall I’m very positive that I’m going to beat this. My friends have been incredibly supportive, even being so far away. I’m asking all of my friends to be as positive about it as I am.

The school where I teach has been very supportive and although they cannot pay me while I’m not working, they are keeping a position open for when I am well enough to work again. I have been very lucky to find a support network here in Bangkok, a place where I knew nobody a few months ago. Through a Facebook group I have had many offers of help come in – babysitting, meals, playdates, hand me down clothes for Isaac – so many offers from so many kind strangers, even just positive messages telling me of good experiences they have had with my hospital. It has been truly heartwarming and each has brought a tear to my eye. My mum and sister came to stay for the first two weeks, and also friends from Siem Reap have visited for weekends. I haven’t felt alone here at all, it really has been amazing.

Our days have settled into a routine of going to hospital for radiation in the mornings, then a little grocery shopping or walk in the park in the afternoons. Radiation leaves me feeling very tired, so the biggest challenge is finding the energy to have quality time with Isaac. I have started teaching Isaac to read though – in waiting rooms! I’m immensely proud for him to be able to focus long enough to take it in.

Being diagnosed with cancer has made me realise that it’s not guaranteed I’ll see him grow up. I’m letting go of the things that won’t matter in the long run – I’m picking my battles and asking myself, will it really matter tomorrow or next week? I’m becoming more relaxed with him, and making our days less stressful in the process.

The most meaningful moments for me are the little ones, like marvelling over his Lego creations when he proudly shows them to me, wearing the found flowers he gives me every day in my hair instead of putting them in my bag, just sitting and watching him draw. Noticing the special little things that make him who he is, and telling him that I notice.

After this is all over, I dream of going back to Siem Reap, back to our normal lives, but with a lot less stress and a lot more meaning to our days.”

If you’d like to follow Rebecca’s story and show support, her lovely friends have set up a fundraising site to help raise at least $45,000 to help ease the costs of her treatment, recovery, and care for Isaac. 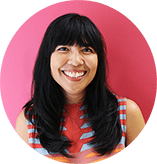