There's no better way to celebrate International Women's Day than by getting your read on with these seriously inspiring feminist books.

We don’t know about you, but we can always find a great excuse to squirrel up at home with a good book. And if you’re like us, there’s nothing we like better than a nice glass of pinot noir and some peace and quiet to go with it. So, this International Women’s Day (Monday 8 March, woot!), send the kids to a park with their scooters and settle down with one of these feminist books. And here’s to empowering yo’self, and your sister-friends! Did you read The Odyssey in high school? Yes? Then you’ll probably remember Circe, the beautiful, powerful goddess that turned all of Odysseus’s men into pigs. Turns out, there’s so much more to Circe than this. Unlike your typical stories of Ancient Greek goddesses, Circe is not a lovelorn woman pining for some kind of connection. Instead, she’s a multi-faceted character with family issues, awesome powers, a great heart and inner strength who is all about living life to the fullest. She’s basically a badass b*tch. We love, love, love it. It’s one of our fave feminist books.

Women Who Run With the Wolves: Myths and Stories of the Wild Woman Archetype by Dr. Clarissa Pinkola Estés

What does it mean to be a woman? In her book, Estés uses classic fables and fairy tales to challenge everything we’ve been taught about being a woman. We’re talking painful experiences and transforming them into metaphors and stories that will help us reconnect with our true wild woman selves. From why we fear what we do and why we ignore our instincts, to the kind of romantic relationships we’re supposed to have and the suppression of creativity in our professional and personal lives – it’s all in there.

The Power by Naomi Alderman

Imagine if one day, people developed the ability to produce electricity inside of them. Now imagine if those people were women and that they could use this power to kill, destroy and torture people. Well, that’s exactly what happens in Alderman’s dystopian, feminist book about a world formerly built on patriarchy that has gone all topsy turvy. Women now have the power and the strength, and men are the ones who have to watch their back. Talk about crazy times!

Know My Name by Chanel Miller

Formerly known to the public as Emily Doe, the survivor of the Stanford swimmer rape case, Chanel Miller finally tells her story and most importantly, reveals her real name. Her statement was posted on Buzzfeed, which instantly went viral. It inspired millions and shook up some changes in Californian law (the judge in the case was recalled). In her novel, Miller bravely shares her story, giving courage to women who were once afraid to speak out in fear of being shamed.

Simone is the new cool girl in school but she has a secret: she’s HIV positive. She starts dating Miles, the resident cutie and as things start to get more physical, she starts to question herself and whether or not she should tell Miles. Things get worse when she finds an anonymous note in her locker threatening to reveal her secret if she doesn’t break up with Miles. Will she stand up for herself or keep on living in the shadows? You’ll have to read this book to find out.

The Mercies by Kiran Millwood Hargrave

On Christmas Eve in 1617, in the Norwegian island of Vardo, a crazy storm kills every man in the village. The women left behind need to learn to fend for themselves, and some do it in more unusual ways than others. When a new leader (who happens to be a witch-hunter) arrives with his young wife and tries to take control of Vardo, he faces something he’s never experienced: strong-willed, independent women. Based on the Salem witch trials, this book shows how strong women really are. 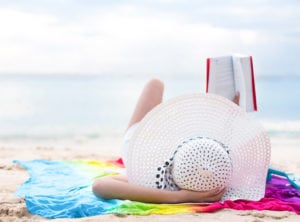 Mum-reads! Add these books to your essential reading list!

More feminist books, but this time for all ages

This mystery sci-fi comic book series chronicles four tween newspaper delivery girls who inadvertently get caught in between two warring factions. If you’re a fan of Stranger Things and want to read something thematically similar with colours that pop out, then this graphic novel comes highly recommended!

A Thousand Nights by E.K. Johnston

Loosely inspired by One Thousand and One Nights, this contemporary young adult fiction weaves an evocative tale with themes of love, mystery, and magic. How did the protagonist manage to survive night after night? What kind of stories did she tell the king? Pick up this page-turner and satiate your curiosity.

Everyone should know this children’s classic which highlights the most important lesson in life: that one should practise self-love and see value in themselves rather than how others see them. Dahl’s beloved creation is an evergreen reminder that you will never get bored, even after multiple readings.

Historian Laurel Thatcher Urich once proclaimed: “Well-behaved women seldom make history.” This compilation features women who dared to push boundaries and challenge the status quo, effectively changing the world. With its rousing prose and beautiful illustrations, this book is the perfect tribute to all rebel girls everywhere.

An anthology of 100 stories with stunning illustrations by sixty female artists from all over the world, this book features inspiring tales of empowering women. Think Queen Elizabeth I, Malala Yousafzai, and Michelle Obama. We think this book is a perfect read at all times, not just for International Women’s Day.

This “autobiographical comedy” book, which topped The New York Times Best Seller list for five weeks, is all about the author, Tina Fey. It follows her life growing up, delving into the working world, and of course, becoming a mother. It’s a must-read if you are a fan of Ms Fey and/or into reading laugh-out-loud memoirs.

You Play The Girl by Carina Chocano

What is it like to be “the girl”, according to the media? In this collection of personal essays and analyses, Carina Chocano takes a look at how to be an actual woman, compared to a man’s idea of what a woman should be. Smart and enjoyable, this is one of those feminist books that every woman should have on their shelves.

Love these feminist books? Check out these LGBTQ+ books too!