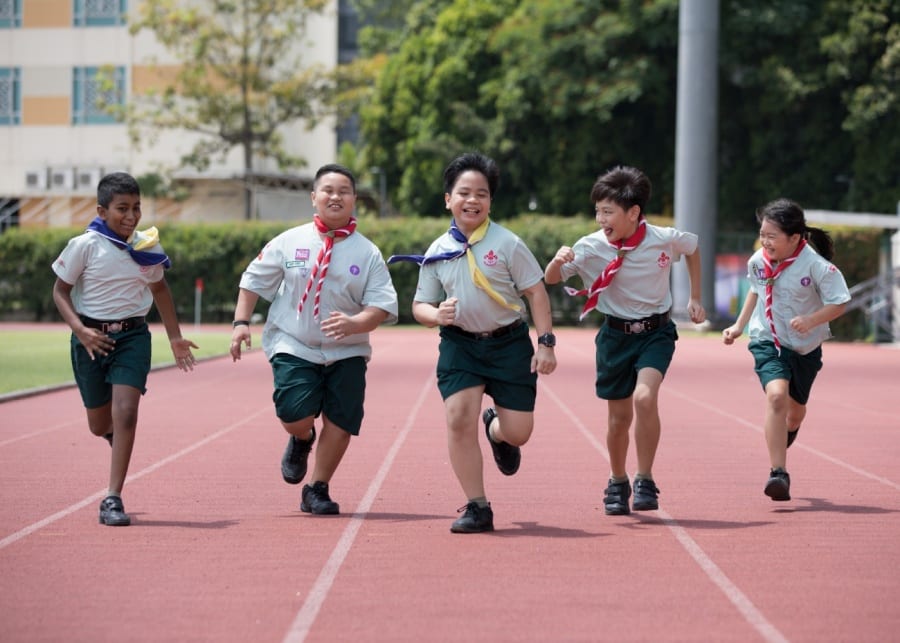 We've got the deets on all things CCA-related in Singapore. Read on to find out more…

Looking for fun things for the kids to do after school? We know all about enrichment and activities for children including drama classes, singing lessons, sports and music lessons to keep the kids busy once school’s out for the day. But what about the old-school CCAs in Singapore (or clubs, as we called them) we loved when we were kids? Think spiffy uniforms, good old-fashioned outdoor adventures, team-building exercises and badge-earning schemes. Yep, we’re talking after-school clubs like Brownies and Scouts, first-aid courses and cadet programs! Read on for all the action-packed, beret-wearing, confidence-building CCAs for kids of all ages in Singapore.

CCAs for kids in Singapore

Who danced around a toadstool singing cute songs as a child while dressed in a very brown uniform? Hands up! Kiddos in Singapore can kumbaya next to a campfire by joining the Brownies, aimed at girls aged nine to 12 years. Brownies are encouraged to explore the world around them, embrace independence and try out heaps of adventurous activities. All while learning new skills and picking up lasting friendships along the way! We only wish that the brown bobble hat of our own childhood was still part of the get-up…

Once your Brownies have hit the pre-teen scene, then it’s time for them to ditch the brown threads and move on to a blue number when joining Girl Guides. Young ladies aged 12 to 17 years will work towards gaining badges and awards while taking part in individual and group activities. Sports, games, camping and community projects are all part of the Be Prepared ethos that Guides embodies. We love that our girls will be facing challenges and new adventures. Think volunteering with the elderly to taking part in anti-bullying campaigns. Plus, they get their own cool handshake. Can we join?

Formerly known as the Boy Scouts Association, these days, this popular extra-curricular activity is open to boys and girls from age seven. The SSA is one of the oldest youth movements in Singapore, inaugurated in 1912! Emphasis is on duty to country, as well as helping other people. Groups are open to kiddos of any nationality or ability and are often offered as a CCA in primary schools. We have our own little scout and love that she is picking up essential life skills, and enjoying activities and games she wouldn’t usually try. She’s also earning heaps of badges and is becoming much more concerned about her environment and community. Plus, she looks pretty cool in that pea-green uniform. Kids through to teens and adults can stay involved right through to age 26!

For teenagers from Secondary 1 upwards (age around 13 years), why not steer them towards the straight and narrow by signing them up for the National Police Cadet Corps? Not only will your youths get a pretty snazzy uniform, but they will hopefully step away from usual teenage inertia while keeping minds busy. We’re talking tons of activities designed to teach values such as discipline, loyalty and integrity. Sounds like a dream come true for those of us parenting teenagers…

Bring out your kids’ inner compassion while getting them on board with learning essential first-aid skills and humanitarian projects when they join the Red Cross Youth. Mini humanitarians volunteer in the community, sharing that famous Red Cross spirit and are encouraged to become top-notch citizens along the way. We also love that the Red Cross lives its message of inclusiveness. They’ve formed a special Red Cross Youth club, especially for kiddos with disabilities, over at the ASPN Delta Senior School. Thumbs up from us, Red Cross!

As a former teen Air Cadet myself back in the UK, this is one CCA I would love to sign my kiddos up for! NCC is offered in secondary schools as an after-school club and is divided into three distinct sections: air, land and sea. This popular organisation has a 20,000-strong membership, all of who take part in adventurous military-related activities in affiliation with the Singapore Armed Forces. It’s more than 20 years since I hung up my own beret and stopped polishing my shoes into a mirror, but I still have the fondest memories and formed plenty of lifelong friendships on my outward-bound escapades.

For the kiddos who want that scout experience but also cherish and reinforce their Christian values, Boys’ Brigade is the CCA for you! Ranging from the explorers programme for the young kiddos to junior and senior programmes, it allows them to take part in a plethora of value-filled activities. Not only that, they get snazzy uniforms that change according to the various programmes, with badges to boot. This CCA for kids sounds so enriching; we want to join too!

St John Brigade extends its volunteer and training programs to kiddos through the Cadet and Badger schemes. These are often offered as a CCA at primary and secondary schools across Singapore, and programs aim to prep youths for a bright future in healthcare by training youngsters in first aid and home nursing skills. Members will participate in leadership development, badge-earning schemes, and community service-based projects while making new friends and building confidence.

Interesting CCAs for kids in Singapore

You’ve probably already heard of unique CCAs like handbells, the chess club or golf. But we’ve found some even lesser-known CCAs that are truly worth checking out, as they might be just what your kids are looking for.

Schools usually have some form of orchestra or musical ensemble, but a military band is one that’s a little less well-known. It’s hard enough playing an instrument, but playing it while marching in formation in full military uniform? Hats off to the kids from Deyi Secondary School! The angklung is an Indonesian musical instrument that’s made up of bamboo tubes attached to a frame. The tubes are struck and shaken to create a resonant sound (think handbells). Angklung ensembles are usually coupled with the Kulintang, another ancient instrument made up of a row of knobbed gongs. When they come together, it’s not only a treat for the ears, but the amazing traditional costumes the students wear during performances are also a feast for the eyes. We hear it’s a favourite amongst the students at Crescent Girls School and St. Anthony’s Canossian Secondary School.

Another genre of Indonesian music, a gamelan ensemble, is made up of percussion instruments like drums, knobbed gongs, metallophones, xylophones and bowed and plucked strings. Gamelan is strictly a group effort with a polyphonic sound, so every performer needs to be in tune. A wayward strike could throw a meditative and soothing piece off. We’re amazed at primary school students, especially those from Lian Hua Primary School, who possess the patience and coordination to produce such beautiful music.

The Guzheng is a Chinese zither, an ancient instrument made up of 21 strings. When plucked, each of them produces a variety of sounds. Learning how to play this delicate instrument is supposed to teach finesse and discipline. Put musically-talented students like those from North View Primary School or Cedar Girls Secondary School in front of this instrument, and they promise to give you a show-stopping performance.

Organised by the parent volunteers at the Singapore American School, this co-curricular activity has kids learning the ins and outs of ballroom dance, dining and social etiquette. TDT isn’t just for learning which fork goes with which course (always start from the outside and work your way in), but it also teaches kids social graces and how to behave in formal settings. They’ll even get to strut their stuff at the monthly dinner dances.

This fusion of kayaking, water polo and basketball is a challenging sport meant for teens over 17, but NUS High recruits new players from as young as 13. Players have to score goals into nets on either side of the pool while manoeuvring their kayaks. Sounds easy? Try having ten kayaks playing bumper boats in a swimming pool at the same time!

Coined from the Malay word ‘to kick’ (sepak) and the Thai word ‘woven ball’ (takraw), this old-school ‘kampung’ game is today a recognised sport across the world. The game is simple yet interesting. You need to get a rattan ball, the size of your hand, across a net. The tricky part? You can only use your feet, knees, chest or head to do so, but not your hands. Some secondary schools like Queensway Secondary School offer it as a CCA, and who knows, maybe the students there have got their eyes on an Olympic gold medal!

Tchoukball (pronounced ‘chow-kuh-ball’) is an indoor team sport created by Swiss biologist Dr Hermann Brandt in the 1970s. He wanted to reduce the number of injuries people sustained while playing sports. This non-contact game is usually played on an indoor court. At each end of the court, there’s a one square metre ‘frame’ and a semi-circular D-shaped forbidden zone. Each team can score on both ends of the court, but in order to score a point, the ball must be thrown by an attacking player, hit the frame and bounce outside the ‘D’ without being caught by the defending team. Tchoukball is being taught at both primary and secondary schools, including Jurongville Secondary School and Farrer Park Primary School.

This playground game isn’t just great during recess, it’s also a popular sport amongst primary students in schools like Teck Ghee Primary School and Horizon Primary School. Skipping is a great form of cardio and improves coordination. Kids who pick this CCA don’t just learn techniques like the criss-cross (and there are some amazing technique names like Toad, Awesome Annie and TJ); they also perform choreographed routines at competitions.

Available in 15 secondary schools in Singapore, the Singapore Youth Flying Club lets teens live out their Top Gun dreams. Students don’t get to practice on a real aircraft until they’re at least 16 years old but do get to design and race model aeroplanes and even try out flight simulators.

It’s not a recognised CCA in most schools just yet, but if your gamer teen wants to rally together a team to take part in the Campus Legends, they can. Just fill in a form, and they’ll be able to compete against other schools in League of Legends (a multiplayer online battle arena) and earn CCA points too. Don’t be so quick to write off gaming, it teaches teamwork and problem-solving skills, so there are benefits to be had. Check out our clueless parents’ guide to online gaming.

Ready to sign your kiddos up for a CCA in Singapore? Don’t forget to tag us on Instagram!

Baby & toddler classes you and bubba will love!