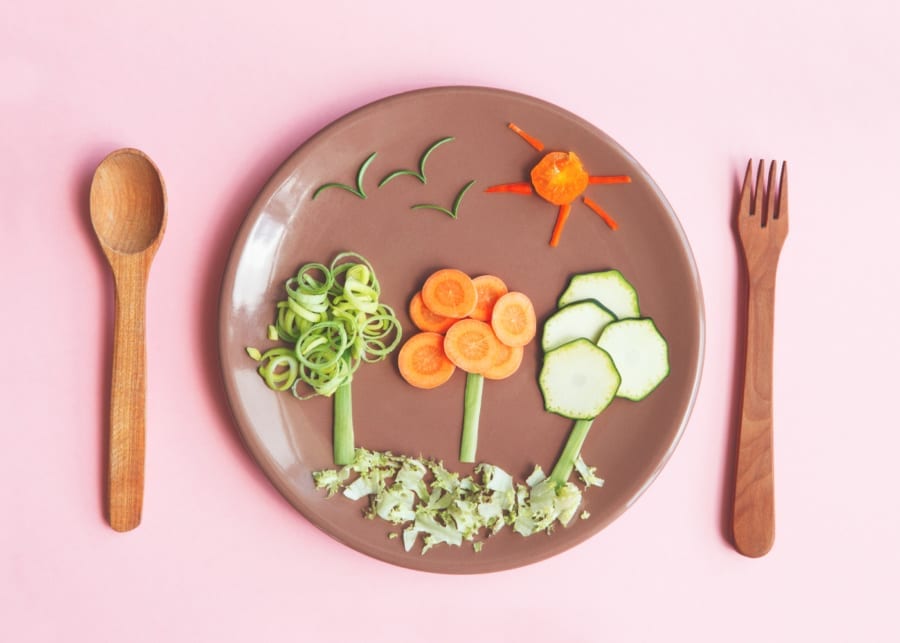 Move over, meat – we’ve got some super suggestions for plant-based meals for kids and the rest of the family. Whether you're vegan or not, you'll love these healthy feasts!

There’s a growing awareness around plant-based diets and reducing our meat intake. Serious stats, alarming articles and disturbing docos such as The Gamechangers or Forks Over Knives have made us seriously ponder the impact – both on our bodies and the planet – of eating meat. From smarter snacking to healthier dinners, we’ve definitely recognised the benefits of rethinking what we’re putting on our plates – and, as a result, are fully embracing Veganuary and the Meat-Free Monday movement that’s swept the planet. Whether it’s once a week, a full-on conversion to going vegan or something in between, the bottom line is that every little bit helps. And we’re showing you how plant-based meals for kids are both possible – and yummy!

Why go meat-free on Mondays?

Now more than 10 years in, the Meat-Free Monday scheme was pioneered by former Beatles singer Paul McCartney and his daughters Stella and Mary, with the idea that “one day a week can make a world of difference.” The not-for-profit campaign aims to raise awareness of the negative environmental impact of animal agriculture and industrial fishing and encourages people to help slow climate change, conserve natural resources and improve their health by having at least one plant-based day each week.

Some scary stats to consider:

How to go meat-free at home

First off, don’t panic. It’s actually surprisingly easy to go meatless for at least one meal a week at home. Our tip? Plan ahead and make sure you’ve got the right ingredients on hand at home – that way you won’t fly into a fluster come dinner time and just resort to cheesy pasta (again). These plant-based meal ideas for kids will make you feel like a total supermum when everyone demands second helpings!

Sometimes, a lot of our meals work just as well by simply not including meat. But if you’re in need of some vegan food inspo, check out our current faves from some great recipe sites. Paired with a mean dipping sauce, Vietnamese fresh spring rolls are a one-way ticket to Yumsville! Better yet, you can get the kids to help you roll ‘em too. Pack them full of your favourite ingredients: we love crunchy beansprouts, fresh mint, sweet carrot, red cabbage and vermicelli noodles. This one’s great for packing in oodles of veg… and it’s all mostly hidden! You can also tweak your spices to suit your tastes. We like to use a food processor to whizz up different varieties of mushroom, carrot, zucchini, onion and capsicum, then fry off until it starts to go gnarly. Then add in your beans, a couple of tins of peeled plum tomatoes, and your spices (ground cumin, chilli flakes and paprika are a good start). You can add what you like really, but for those who like to follow a recipe, this one from Simply Recipes could inspire you. Serve with brown rice, cous cous or quinoa for extra bulking. This vegan pasta dish looks so decadent, but it’s actually surprisingly simple, and we reckon the little people in your life will gobble it up too. The puréed butternut squash tastes creamy without a dollop of dairy in sight. Full marks to Cookie and Kate for such a sterling recipe! This one’s a great one during rainy season when you just want something super warm and comforting. In this recipe from Cupful of Kale, it’s out with the lamb and in with the lentils, while the sweet potato mash topping is gorgeousness in every bite. Nom. Kids love burgers, right? There’s just something about eating with their hands that they can’t get enough of! Grab your food processor and quickly rustle up these moreish black bean burgers from Making Thyme for Health. You can top them with anything you like, but we like some red onion and fresh avocado. Serve with sweet potato fries sprinkled with a little cayenne pepper for extra nom factor. We seriously dig how quick and easy these morsels are to rustle up. Not only that, but they make great party food for both kids and adults. They’re loaded with zucchini, cauliflower, carrots, onions, and garlic… and you won’t be able to stop at just one! Check out the recipe from Sweet Simple Vegan. We haven’t got round to trying this one yet, so can’t vouch for its yumminess, but it’s certainly next on our list! We like the sound of its simplicity, and we know our kids will love slurping on those nutty noodles. Thanks to Vegan Richa for this one! Psst, best to avoid this one if the littlies have a peanut allergy… Pizza + kids = happiness! Healthy Little Foodies have a great little recipe – it’s not vegan as it uses cheese (although you can easily swap out the cheddar for vegan cheese), but it’s still a good no-meat meal to try with the young ‘uns. Get them to help you add assorted toppings too to get them helping out in the kitchen. You could also make a pizza on a larger scale if you prefer to super-size.

Breakfast is the most important meal of the day, but it can be a challenge getting the kiddos to have their breakfast when everyone’s just rushing to get to school on time! This recipe from Healthy Grocery Girl gets the thumbs up from us. Not only are they easy to make, you can also pack them in lunchboxes for a midday snack.

Shakshuka is a popular Middle Eastern dish that originated from North Africa. There are many variations, but this recipe from Red Tricycle puts a plant-based spin on the dish. It doesn’t take too much time, and is yummy enough to be served at dinner. Have a go at making this and we bet your kids will be plant-based converts!

No one can resist a good bowl of mac and cheese. So here’s a vegan take on the American classic, which uses vegan Cheddar, pureed cauliflower, and turmeric. Follow this recipe from Food Network and we’re confident that you’ll be able to convince your kids to try out more plant-based meals – with this as the introduction!

Looking to reduce – or even eliminate – oil from your diet? Then this plant-based meal is definitely one recipe that you and the fam can get behind. Just swap out the oil for water, use your favourite veggies, good ol’ leftover brown rice, and soy sauce. The good thing about this recipe is that you can adjust according to your whims and fancies. More veggies? Sure, why not! Add more soy sauce? Go for it! Plant Based and Broke has the instructions on making this yummy staple.

Here’s another simple recipe that you can whip up for breakfast. It only takes 15 minutes tops and requires only three ingredients: banana, oats, and milk, AKA stuff that you can find in your kitchen. Add in a little bit of cinnamon for a more flavourful flapjack. We’ll definitely be making more of these, thanks to Green Evi!

This is a heartwarming plant-based meal that you can serve any time of the day. Adding squash and kale creates a yummy, hearty dish that the kiddos will surely lap up till the bottom of the bowl. The Cook’s Cook has listed down this recipe that’ll guarantee second helpings from everyone after they’re done. How to teach kids about sustainability

How to grow veggies from food scraps