All the expert advice and info you need to know about keeping your wee ones safe when using taxis and ride-hailing apps in Singapore.

Whether you’re a parent who’s new to Singapore or a Red Dot veteran, the issue of safe taxi travel with kids has no doubt plagued your mind. If you don’t own a car, it’s likely to crop up a LOT. So what are the laws, what are the risks and what products are out there to help keep your kiddos safe? We chatted with Elise Mawson of Taxi Baby to give us the facts, and to help you figure out both what’s safe and what absolutely isn’t. Elise is a qualified child passenger safety technician and a veritable encyclopedia of all things taxi safety in Singapore. So strap yourselves in for some confronting, but critically important, stuff. (And yes, while coronavirus may mean we’re staying home, if you absolutely have to use the car, here’s how you can be safe when you do.)

Ready for some confronting numbers? Take a deep breath…

So how do you avoid becoming one of these statistics? Learn how to buckle up (we promise it’s not hard)! Securing children in age- and size-appropriate car seats, booster seats and seat belts really does reduce the risk of serious and fatal injuries.

“The sheer number of kids riding unrestrained in taxis is such a concern,” says Elise. “It’s like driving around with an unexploded bomb and the most heartbreaking part is that injuries (and deaths) sustained during road accidents are so easily avoided by using car seats and booster seats.”

According to the Centers for Disease Control and Prevention:

Know the local laws – and that taxis are exempt

Kids riding in cars in Singapore must be secured with a child restraint that’s appropriate for their height and weight. But, did you know that taxis in Singapore are exempt from child restraint laws? The law states that kids who are less than 1.35 metres tall are required to use booster seats or approved adjustable seat belts so as to lower the risk of injury in the event of an accident.

The bottom line? “Buckle up every single human being (kids and adults), in every vehicle (taxis, school buses, Grandma’s car), every single time,” says Elise. “A lot of us operate under the misconception that travelling short distances at low speeds isn’t risky and doesn’t require car seats. But the stats show that most accidents happen less than five minutes from home. So, just like washing your hands and putting on shoes, get into the habit of buckling up every time. Make it your new normal.”

Can’t I just take a Grab?

Nope. Since Grab, Gojek and other similar rides are considered private vehicles under the law, they’re not exempt from car seat regulations. To be crystal clear: if you don’t use a child restraint appropriate for your child’s height and weight in a private vehicle, you are breaking the law. And the penalty is more than a slap on the wrist: if convicted, you’ll face or even serve prison time. These cars are equipped with either one car seat (an Urban Kanga or IMMI GO) for ages 1–3, or one mifold booster seat (ages four and up). GrabFamily drivers have all received training: Taxi Baby trains the Urban Kanga drivers, while Grab provides the mifold training. However, as the parent, the responsibility lies with you. “At the end of the day, you’re the one who is responsible for safeguarding your child, so make sure you’ve familiarised yourself with the restraints before you book a GrabFamily car,” says Elise. “This way, you can double check your child is buckled safely.”

And if you have two young kids travelling with you, you’ll need to consider your options. At the time of writing, Grab doesn’t offer a combined Urban Kanga + mifold service. However, many GrabFamily (Ages 1-3) drivers also have a mifold in their car and they can manually add a $2 surcharge to your existing booking to allow you to use it. However, this isn’t guaranteed, so if you want to avoid the frustration and inconvenience of getting turned away and rebooking, it’s easiest to bring your own mifold along each time.

Don’t think that strapping your wee one into a baby carrier and then jumping into a taxi will offer you any safety: they will do nothing to protect your baby in an accident. “In a car accident, using a carrier is just the same as holding bub on your lap,” explains Elise. “The carrier can’t possibly hold onto your child’s weight under the extreme force involved in an accident and disintegrates in about 0.2 seconds. There is no configuration in which a baby carrier provides any kind of protection in the event of an accident.” We’ve watched the crash test videos, and it’s horrific.

Why won’t a regular seatbelt suffice?

Kids just aren’t big enough to sit safely in a car without a child restraint. If the lap belt runs across the stomach instead of the upper thighs, this increases the risk of severe injuries (doctors even have a name for this: ‘seatbelt syndrome’). This means the force of a collision is borne by the stomach and (gulp) there’s a chance the belt will slice through the body. Head injuries are also more likely as the child has nothing holding their upper body back. Remember: taxis may be exempt from the laws of Singapore but they’re not exempt from the laws of physics!

So, now we know it’s not safe to just ‘wing it’, what can we do? Here, Elise offers her advice and recommendations per age group… 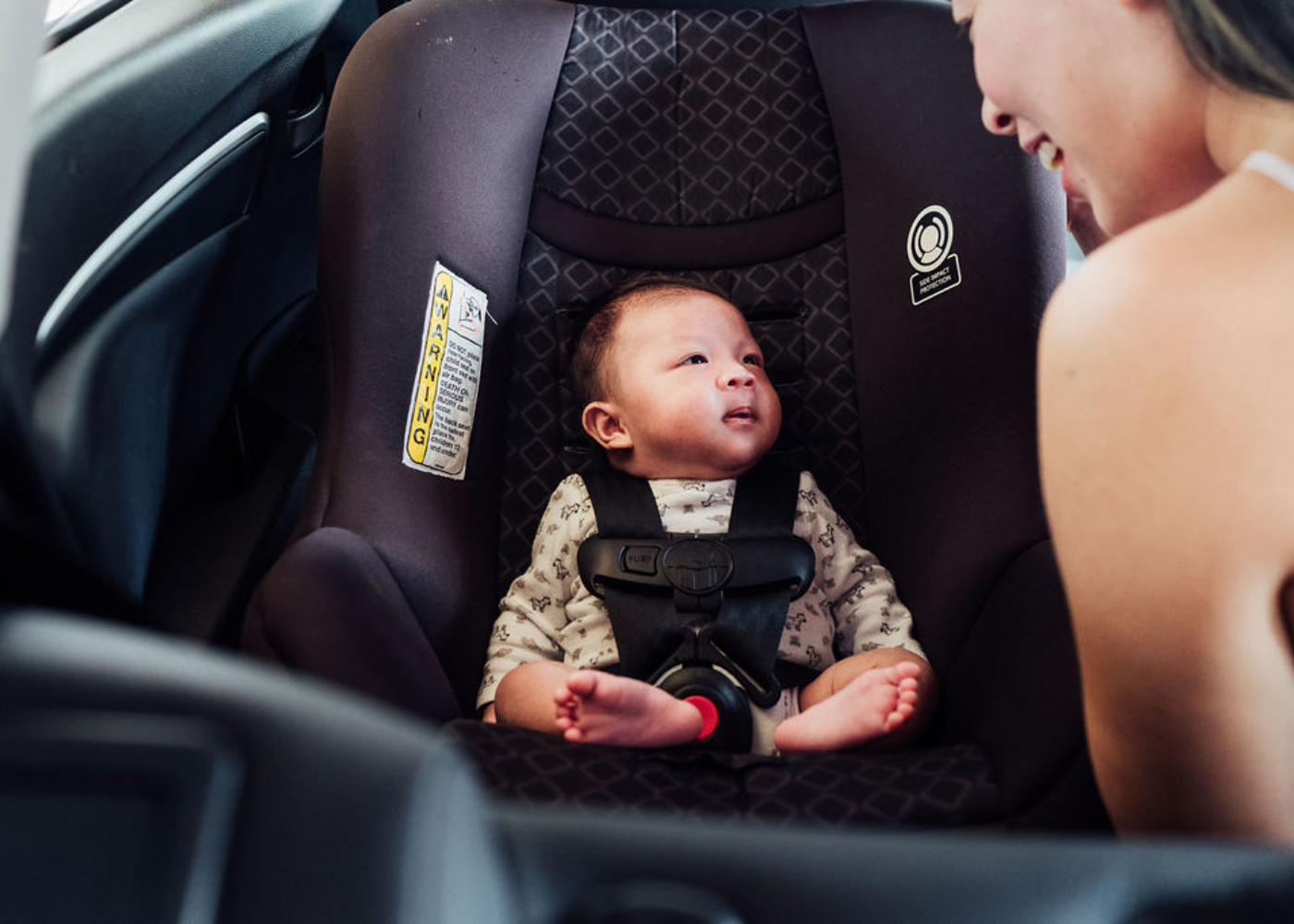 For this age group, there are two categories of seats to choose from. Infant car seats (also known as capsules or bucket seats) typically fit tiny newborns a bit better, can attach to strollers (meaning you don’t have to wake bub when moving in and out of the car) and have a sunshade and handle. They really shine for the first four to seven months but are typically outgrown sometime in the child’s second year of life. The alternative is a convertible car seat, which can be used from birth until approximately four years of age. These seats are often better value in the long run, typically heavier and great if you have your own car, although don’t tend to fit teeny tiny newborns as easily as infant-only car seats.

My top picks: The Mountain Buggy Protect  is ultra lightweight, very narrow and easy on the pocket, while the BeSafe iZi Go Modular has more bells and luxury whistles. The Doona is a car-seat-stroller-in-one – a clever little bunny. For a longer-lasting seat that’s great to use in taxis, I’d go with the Cosco Scenera NEXT. Also, if you want something that can fold down when you aren’t using it, check out the Nachfolger.

Kids should ride rear-facing for as long as possible – ideally until age four or older, but at the very least until they are two. We want to help you buckle your kid up on every single ride, and if a rear-facing car seat is not practical enough for you to achieve that, then using a forward-facing seat is still better than not using a seat at all.

My top picks: If you need to take taxis, my favourites are the Urban Kanga, Cosco Scenera NEXT and RideSafer vest (ideally you’d be keeping your little one in a car seat until three before shifting to the vest). If you’ve got a car, then I really love the extended rear-facing Scandinavian seats like the BeSafe iZi Modular i-Size, Axkid Minikid, or the more budget-friendly Axkid Move (both of which rear face to a whopping 25kg!).

The golden rule for this age bracket is to delay graduating your child to a booster seat for as long as possible. Kids are much safer (and usually much more comfortable) in a harnessed car seat than a booster seat until they’ve completely outgrown it (ideally in the 5–8-year old range).

My top picks: If you don’t have a car, I recommend the RideSafer vest (which comes in large size too – it’s not just for little kids!), the mifold range or possibly the hifold (which is a high-back booster better suited to rental cars, car sharing and carpooling than taxis). If you have a car of your own, then the forward-facing car seats I like are the Britax Advansafix (available locally) or Evenflo Maestro Sport (from Amazon).

Kids need to keep using a booster seat until they meet all conditions of the five-step test:

My top picks: If you’re car-less, check the recommended seats above for ‘young children’. If you have a car, then look at high-back boosters, once your tween has outgrown their harnessed car seat. My picks are the hifold, BeSafe iZi UP, or Britax KidFix (the second two require ISOfix).

How local businesses adapt during Covid-19