It seemed that almost everything that could have gone wrong with my pregnancy, did go wrong. And it all started with an incompetent cervix...

I was promised a beautiful, Instagram-worthy, magical journey when I fell pregnant. A more womanly body and a fresh glow awaited me. Not to mention thicker, more luscious hair… I couldn’t wait! I was going to be a Pilates mum. One of those women who lived in their active wear, did swim aerobics, working till the day they popped and would be rewarded with the easiest, most smooth delivery.

What I ended up getting was a pandemic, the stress of my partner’s company possibly closing, relying on just my income, and oh yes, an incompetent cervix, which resulted in four months of bed rest, and a traumatic delivery. The first trimester was like waking up with a hangover every day. Then my husband came into contact with a suspected Covid patient, so we were quarantined . The day we were out of quarantine, we went into Circuit Breaker, so I was again isolated for much of my second trimester. I had one week of freedom before the bedrest begun.

Before pregnancy, your cervix, the lower part of the uterus that opens to the vagina, is normally closed and firm. Having an incompetent or insufficient cervix, means the muscle fibers are weakened. In my case, my cervix was shortening, and opening prematurely. I was barely in my second trimester.

You’ll usually get your cervix checked around the 20-25 week mark. I was feeling a lot of pressure and an achy pain around the vulva when I stood, sat or walked too long. Everyone brushed it off, “ Of course you’ll feel pressure, your baby is getting heavier”. I never brought it up at my doctor’s visits either. How do you get an incompetent cervix?

I didn’t want to be the trigger happy, new mother who works herself up into a frenzy at every little ache. I carried on working, carrying heavy equipment, and even climbed Bukit Timah Hill, because the husband thought it would be good to get out and exercise a bit. The second I sat down after the walk, I couldn’t stand up again. The usually dull achy pain was becoming more of a stabbing one. I Googled, “stabbing crotch pain” and “lightning crotch” popped up.

Lightning crotch is harmless and usually happens in the third trimester when the baby is descending into the birth canal, and your pelvic bones are starting to pull part. I didn’t give it a second thought. I decided I had early “lightning crotch” and I was fine. Again, I didn’t want to be the overly excited new mother that called her doctor every other minute.

However, when my check-up finally rolled round, I told my doctor of these delightful new pains I had been experiencing. His usually happy and light demeanour darkened. It weighed on me: what the heck was an incompetent cervix? How serious could something so silly sounding be? I Googled, “incompetent cervix causes” and none of them matched me. Here’s what I found:

Nothing! This was my first pregnancy, never smoked, and no trauma to my lady bits came to mind! Why was this happening to me? My doctor said he’d be writing me a two week medical certificate of leave, for bed rest. I told him, “ Oh, it’s ok I’m working from home”. His face darkened more, and told me that this bed rest was to be strictly followed, no sitting up unnecessarily, no walking, no carrying heavy loads. Should I not be able to be trusted to follow them, he’d write me a hospitalisation note. 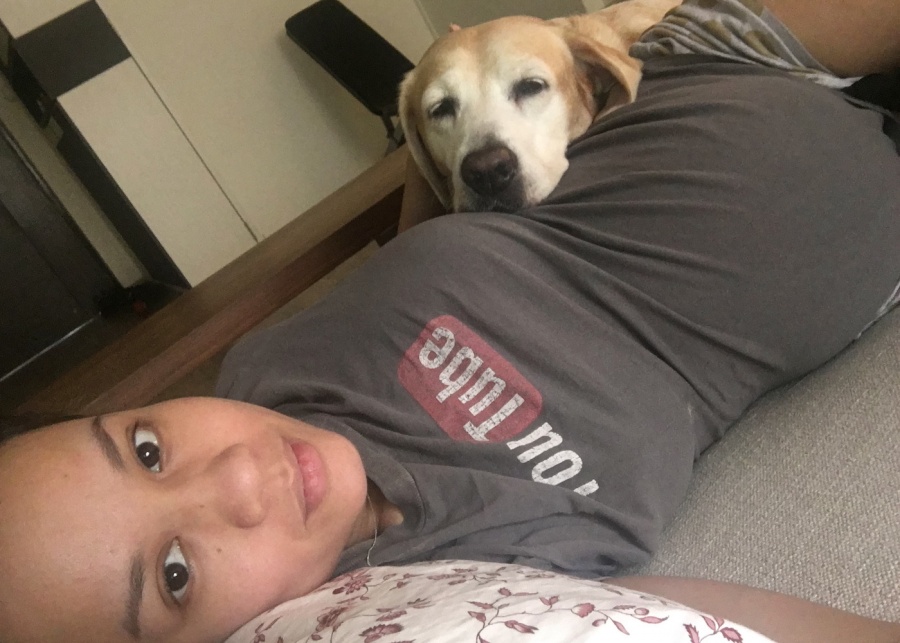 When to take an incompetent cervix seriously

After lots of Googline, it turns out, you should get your cervix checked out the second you experience the following symptoms:

It could all happen as early as 12 weeks. For me it was 16 weeks. In my weekly office meetings, I took the opportunity to tell my team of my condition, and that I would be on hospital leave sooner and for a lot longer than I thought. We all had a good laugh at the silly name, making light of the situation. One colleague even implied I made up this ailment to get extra time off.

Two weeks later, celebrity Chrissy Teigen, wife to singer John Legend, announced that she too suffered form an incompetent cervix, and later placenta abruption. This did not help my case.

In her Instagram stories, she was seen not taking bed rest seriously, walking around, still being an active mother to her two adorable children. This prompted many co-workers to send me her Insta stories, with even more (not to subtly) hinting that I was being dramatic and my condition wasn’t as serious as I made it out to be. Unfortunately, Chrissy Teigen ended up losing her baby boy, Jack, through a combination of having a shortened and weakened cervix and having her placenta prematurely separate from her.

This brought about another round of messages from family, co-workers, and even random social media followers, letting me know how risky it was to have an incompetent cervix and how miscarriage was a very real and possible outcome. Lily was due in October, which just so happened to be Miscarriage Awareness Month. 5 things to do once you’ve got an incompetent cervix.

Say you’re like me, someone who was just born with a weaker cervix that later becomes incompetent. Here are some things you can do to improve your chances of keeping the baby: Lucky for me, I managed to keep Lily in until term and even beyond. She was born at 39 weeks and 4 days. A good 3.05kg with the biggest, roundest head ever. “Hey Jill, since your cervix was prematurely opening, surely the delivery would have been easy, she’d have just slipped right out?” Not quite. Stay tuned to read what went wrong with the next stage of my pregnancy: the delivery edition.

All your awkward birth questions answered!

The ultimate guide to hypnobirthing in SG