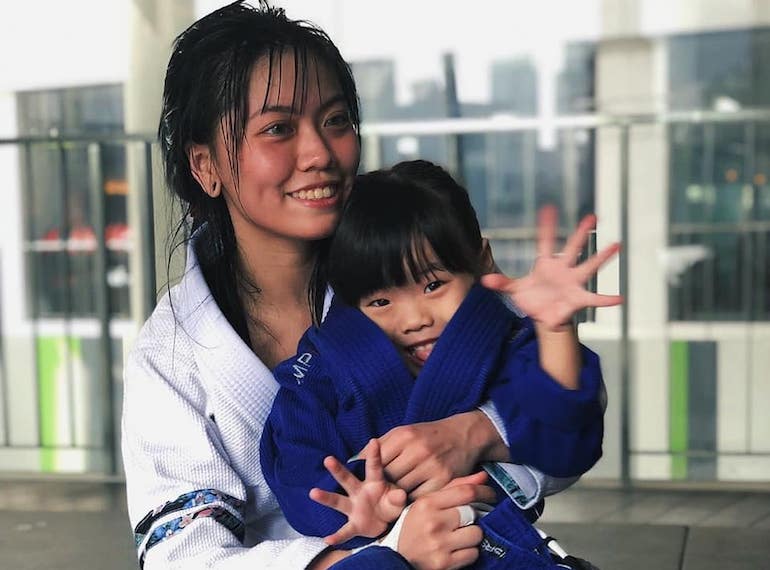 Young mums in Singapore are often harshly and unfairly judged, so we've been speaking to Shermaine Chngy about the reactions she has had since becoming a single mum at 20 years old...

‘That’s probably her younger sister’. ‘She’s probably not a good parent’. ‘She probably isn’t from a good family’. ‘She probably sleeps around’. These are just some common misconceptions many people have about young mums, especially those under the age of 21. To most people, looking like a child while carrying one in your arms warrants tongue wagging and eye rolling – a sad reality that many young mums face on a daily basis. Because of these stigmas, young mums often feel alone and isolated. We’ve been talking to 25 year old, Shermaine Chngy, mum of four-year-old Everleigh, about how even with a strong support system she feels the judging glares from the public at large. Here’s what she has to say about her struggles as a young mum and how she’s determined to fight the stereotype.

Being in your twenties is usually a time for discovery and focusing on school, graduating from university, figuring things out and making mistakes. This was exactly so for Shermaine: as a typical 20 year-old she enjoyed hanging out with her friends, practicing Brazilian Jiu-Jitsu and working towards finishing her Polytechnic diploma. All that came to a grinding halt when she found out she was pregnant. “I was shocked because I was on the pill. I didn’t know how to feel at that time. It seemed really unreal because I was probably too immature to even understand the gravity of the situation,” Shermaine told us.

Breaking the news to her parents was no easy task. In fact, it was her aunt who told Shermaine’s parents the news. “My mum was really supportive and told me that I was old enough to make my own decisions and take responsibility for them. My dad wasn’t happy and said that he didn’t want to have anything to do with the child.” Shermaine says. At first, Shermaine considered terminating her pregnancy: she felt unready to raise a baby and ended up being in denial for most of her pregnancy. But hearing her daughter’s heartbeat for the first time helped make her decision easier. She was determined to have her child, even though she was still terrified about how she would cope.

Shermaine’s friends were divided about her pregnancy. She had some she could rely on and who thoughtfully brought her food when she wasn’t up to going out, but then she had others who had no qualms in telling her she was ruining her life. Similarly, her classmates were in two camps. There were the ones who would be unkind and rude to her, but others who were not only encouraging, but would also help her catch up on work she had missed in class for doctor’s appointments. But the worst – and uncalled for – comments of all? The general public were always ready to offer unwanted and cruel opinions. Despite her bulging stomach when she was six months pregnant, nobody would give up their seat on public transport. “Actually, I didn’t mind that so much. What I minded was, that despite being obviously pregnant (and carrying my textbooks and laptop) that people’s judgement overrode their kindness, and they would throw critical stares at me instead of helping me.” Shermaine said. Interestingly, it seems that this sentiment may carry the world over…

HoneyKids’ Ed, Tracy, had her eldest child at 26 years old but looked much younger. And one (of the many) comments she’ll never forget was on her commute to work on the London Underground. A kind woman (also standing) struck up a conversation about how manners and chivalry were seemingly dead, and that the fact no one had given her a seat was outrageous. A middle aged man retorted, from his seat, “Well, if these teenagers will get themselves knocked up then that’s their look out, not mine. She’s a child herself. She’s capable of standing.” Tracy *may* have re-educated that man rather vehemently that day, and is hopeful that he was never so judgey again.

For Shermaine the criticism didn’t stop even after she gave birth. “While holding my daughter, I’ve had aunties coming up to me and asking ‘Is this your child?’, ‘Are you educated?’, ‘Why didn’t you abort your baby?’, ‘It’s going to be hard for people to accept you’… When it happens I end up justifying myself and telling them I’m pursuing my degree and then calmly walk away.”

Sadly, Everleigh’s father decided he didn’t want to be part of their lives, so being lonely didn’t help how isolated she sometimes felt during the early years. “It sucks not having help. I’ve had to carry my daughter, the diaper bag, my groceries and pram up a flight of stairs without anyone offering to help me. All while people would look on with judgement in their eyes instead. I was  – and still am sometimes – treated like a social pariah.”

These days Shermaine very much takes it all in her stride. Instead of focusing on the negativity she (still) gets from strangers, Shermaine chooses to ignore, and instead concentrates on being the best mummy that she can be to Everleigh. “The best thing about being a mum is seeing your child grow and having her tell me that she loves and misses me – it’s the most amazing feeling in the world! It makes all the sacrifices worth it.”

Despite her busy schedule, Shermaine tries to be there for her daughter as much as she can and is very much a hands-on mum. She brings Everleigh to school, helps out on class trips and also has her daughter come along to her Brazilian Jiu-Jitsu practice at Evolve MMA.

She’s also lucky that despite her parents concerns back when she was pregnant, they are proving a fantastic support system to her now, “My parents help out a lot. My dad is a really doting grandfather and both him and my mum look after my daughter while I study and work.”

But despite all her efforts at being a great mum, Shermaine says she still feels as if everyone is judging her. And while she’s toughened up, it still hurts, “If only our society was a kinder and more understanding one, the world would be a better place. Unfortunately, we can’t expect everyone to understand what they have never been through.”

Shermaine, we salute you. You’re doing an awesome job and your beautiful little girl is testimony that no matter your age, you’re acing it.

The juggle is real: can mothers really have it all?