Pre-kids, we all swear we'll never turn out like our parents. But once that baby comes along? Suddenly those quirky phrases and strange punishments become all too familiar...

By today’s standards, the way my mother raised me would hardly be considered “model parenting”. Between the ‘harsh’ punishments and curt responses to my tantrums, her parenting style is quite different to the permissive or free-range approaches we see today. But at the end of the day, my mother helped shaped who I am, and I’d say I’ve grown into a rather well functioning, resourceful and resilient adult. So, despite the generational differences, here are just a few of the parenting techniques my mother used when I was growing up, and why I’ll be infusing them into my own daughter, Lily, as she grows up.

1. Sleep in your own bed

Sleeping in my parent’s room (the only room that was air-conditioned at the time) was a treat reserved for the weekends, should they extend the invitation to my sister and I. But the “family bed” wasn’t something we did too often. In fact, I have very vivid memories of waking up from a nightmare, and tip-toeing very quietly into my parents room to my father’s side of the bed. He would protect me and let me sleep next to him. Going over to my mother’s side meant getting yelled at and banished back to my room – more afraid than when I came in.

While my generation is big on “family bed” time and co-sleeping, I find that sleep is too precious to share. A good night’s rest makes me a more patient mother, and a more tolerable wife. Though my own mother thinks I over did it (putting Lily in her own room at just two weeks-old) I have no regrets. She’s always been an independent sleeper, and it’s something I’m determined to carry on the older she gets. I probably won’t yell at her if she came to me in the middle of the night, but I also probably won’t let it be a habit of her sneaking into bed with us either. 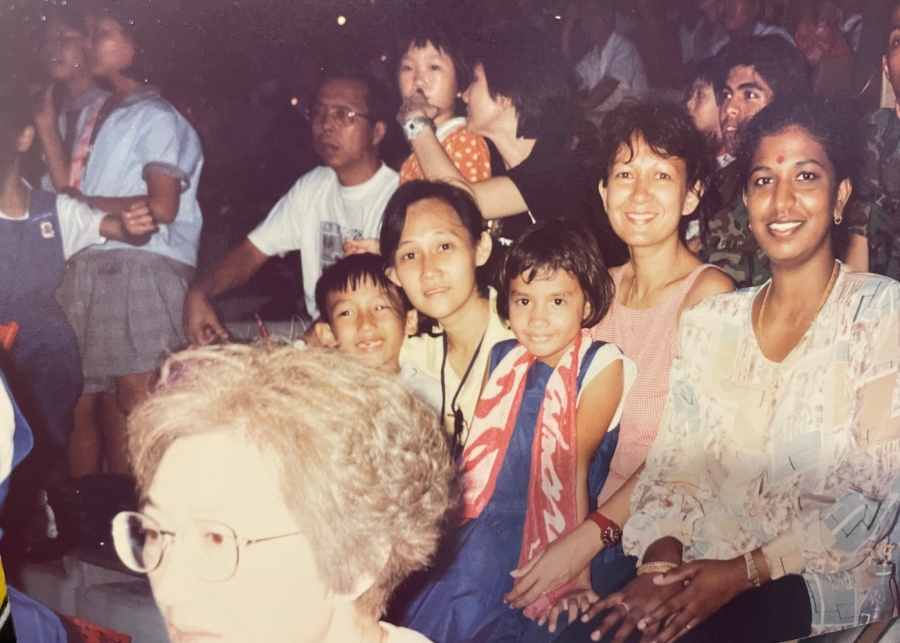 2. Crying doesn’t mean you don’t have to do it.

When I was about six, in preparation for primary school, my mother wanted to make sure I could order myself food and count change. I remember we were at a McDonald’s and I had to order us both a meal. I lined up, and dreaded every step that got me closer to the counter. I had bought things before on my own. Yet, for some reason, I was petrified. Upon reaching the counter, my throat tightened up, and I just couldn’t speak. I ran back to my mum, and dove into her arms crying and embarrassed. She shoved me off her and with her classic line, “Jillian, don’t be ridiculous” I was placed back in the queue. Holding back tears, I had to revisit the back of the line at least a handful of times, before I actually found the courage to place my order.

By today’s standards, and even back then, I’m sure it wasn’t the most ideal way of doing things. However, the aim was achieved. Though I remember exactly how it made me feel – to stand in line crying – I also remember the sudden elation I felt upon receiving my meal. When I got to the table, I asked my mom, “Do you want more sauce?” and before she could answer, I was at the counter getting more, for the mere fact that now I could!

I can’t imagine how long my mother had to sit there watching me make it to the counter, cry, and return to the back of the line. And I hope that when the day comes, there will be less tears for Lily, and I too, will have the patience to let her do it on her own. Too often parents will do things for their child, not because the child isn’t capable of it, but because it’s just faster to do it themselves. Possibly the most Eurasian phrase uttered by every Eurasian parent: “Don’t want? Done.” It’s one of those phrases that’s so grammatically incorrect, yet can be applied to virtually everything. My mother would be hounding me to finish my meal (I was a terrible eater) and when she finally reached her breaking point, she’d snatch the food away and say, “Don’t want? Done!”. It was a reaction that was so curt and definitive, it would make me question whether or not I really was done.

Another example: if I were playing with my cousins (who were much older than me) and I couldn’t keep up, I’d go tattle to my mother and whine about wanting to go home since no one was playing with me. She would immediately lay me down on her lap and ask me to take a nap. A nap? The absolute mortal enemy to any child! So, I would flail about like a fish out of water. This prompted her to give me the ultimatum: “You can either take a nap or go play with them”. I’d have to reiterate my point that, they weren’t playing fair with me, to which the response was always: “Don’t want? Done. Just sit here and watch them play”. Inevitably, the boredom that was listening to my mother and my aunties talk would eventually push me to go play with my cousins again.

The lesson I’ve taken away from this approach is that I was always given a choice, and when neither appealed to me, both choices would be taken away. It’s obviously not the most polished approach, but it’s still something I would definitely continue with my child.

Another playground chant that my mother would use on us is “Too bad, so sad”. My sister once came home from school and told our mother that her classmate was going to DisneyLand for the school holidays, complaining that we never went anywhere. My mother, very matter of factly explained that it’s because we couldn’t afford it. My sister very childishly flung her arms in the air and said how unfair it all was, resulting in my mother giving her the equally childish response of, “too bad, so sad”.

In this new age of parenting, everything needs to be explained in a manner that a child can accept. Time needs to be taken to properly phrase things that would help cushion the blow. While I do agree that certain topics should be approached more delicately, the majority of them can be handled with “too bad, so sad” – AKA life isn’t always fair and you’re not going to like it, so just suck it up.

While Lily is only nine months and I have miles to go, whenever I’m in doubt about something, I think back to how my mother would handle it, and how that made me feel. Though our memories of our parents are never as accurate and truthful as we remember them to be, it’s worth looking back at them to gain some sort of perspective.

Your child is always going to face inequality, disappointment and frustration – those are emotions you can’t avoid. It’s all about how the child learns to deal and cope with them. I dare say that most of how my mother chose to raise me, by today’s standards, would be considered “traumatic” or “harsh”. But they still ended up making a rather well functioning, resourceful and resilient adult. Have I turned into my mother? The transformation is about 87%. Is it a bad thing? Not in the slightest.