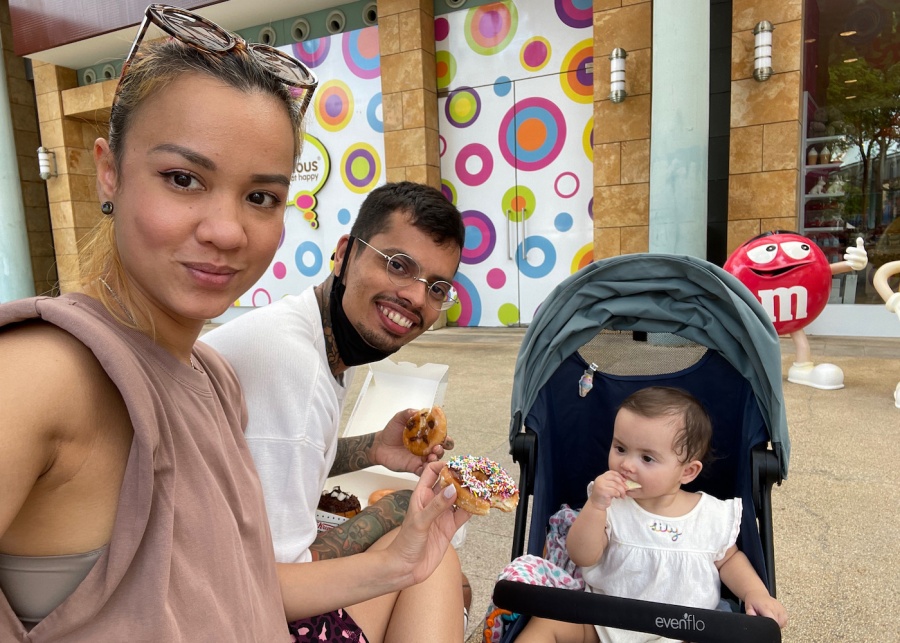 My daughter is Chinese, Eurasian, Sinhalese, Indian and American. But how do I raise her to appreciate all her mixes, and to be self-assured, no matter what?

“We will never eradicate racism, stereotypes, prejudice or discrimination. At best we can hope for tolerance and prepare our young for the inevitable.”

I’m sure if I lied and said the above quote was from Malala Yousafzai or Nelson Mandela or someone cool like John Lennon, you’d probably copy it for an Instagram caption without a second thought. Now you’re probably re-reading the quote trying to find something triggering about it. Well actually, it’s my own quote. Now you’re probably looking at who is writing this article, and what their race is. Lim, ah, Chinese privilege. Now you’re looking at the picture, “Typical, another Asian trying to be blonde”. To be accurate, my current hair colour is orange and pink. I just like colouring my hair.

My father is Chinese, and came from a well-to-do family. His father came from China, didn’t speak English, made his money from nothing. My father is Chinese privilege. My mother is Eurasian, Sinhalese, from the kampongs, and one of nine children. Her father (English/Sinhalese) worked as a jeweller, and her mother (Portuguese) was a housewife/nanny to the neighbours kids (as if nine of her own weren’t enough!) – she had to make money somehow, so she did what she knew best…

My husband, K.C, is mixed as well. His mother is Singaporean Indian, and his father is an American from Baltimore who also served in the Vietnam war. His mother is darker and his father is simply white. K.C grew up looking neither full Indian, nor did he look like he had a drop of Caucasian in him. If you were trying to place him, you’d guess Eurasian or Malay. His mother was Catholic, so he didn’t necessarily grow up with many Indian customs either.

Aside from food, and a couple of Tamil words and phrases, he couldn’t tell you much else about his Indian culture. Likewise with his Caucasian half. Aside from the annual trip to his father’s home town, K.C’s knowledge on anything American is limited to pop culture facts and whatever Donald Trump tweeted while being President.

I’m not here to tackle the racism that we’ve faced as mixed individuals or as a mixed couple. A quick Google search will bestow thousands of articles pertaining to the much talked about matter. Call it discrimination, racism prejudice, ignorance, or stereotyping. We all have met it in some form or another to some extent or another. It is unpleasant. What I want to talk about is how I plan to tackle that with my child who is as mixed as they come, and has parents who are, let’s face it, uncultured.

What does that make her?

After popping out our daughter, then came the paper work. A little recap: my daughter came from me, a Chinese, Eurasian, Sinhalese woman, and her father, an Indian, American man. Thus making her, Chinese, Eurasian, Sinhalese, Indian and American. However, her race is reduced to a simple yet equally confusing, “Caucasian”. It’s going to be challenging enough explaining to people why her race is as such, but more problematic for us as parents to raise her.

When I was younger, I did have faint memories of celebrating Chinese New Year, visiting family and receiving ang baos. Faint memories, because as my mother puts it, “we took you visiting when you were cute… who wants to be visited by an over grown buffalo”. Once I grew into said buffalo, Chinese New Year was a one night reunion dinner with the immediate family followed by an afternoon of watching tacky free-to-air public holiday TV in silence. If there is another Chinese holiday or significant celebration, I couldn’t tell you what it was.

Christmas too wasn’t that big a deal. Though my mother and family are Eurasians, we are the lesser heard of non-Catholic Eurasians. We were also part Sinhalese, so while there was the traditional Sugee cake that most Eurasian families would have, we didn’t do Devil’s Curry. We didn’t leave cookies out for strange men, and we did not celebrate births of baby saviours.

How then, is our child going to feel confident identifying as anything? Granted, she’s only eight months and her looks are constantly changing, but she doesn’t look traditionally Chinese, and it would take some convincing when telling people she’s Indian. Looks aside, how do you raise a child as “Caucasian”? How do you raise a child of so many races, to be proud, confident, and knowledgeable of each part of her with equal importance?

Gigi Hadid has said that she feels she can’t speak up about the injustices of Palestine because she’s too white and not Palestinian enough. That’s the last thing I want my daughter to face: being silenced because, by social standards, she’s “not enough”.
Growing up mixed, my husband and I got that a lot. “Well, you’re not really Caucasian, you lived in Singapore your whole life”. What does location have to do with race?

“Oh, you’re not really Chinese, you can’t speak it well.” I don’t speak Kristang (the forgotten language Eurasians speak) and neither do most Eurasians, but I still am. While race is an important topic that should continue to be spoken about, I don’t believe there will ever be a true end to racism. I think an important step is building the individuals self-worth and confidence.

First before all else, you need to feel comfortable in who you are. Some people find comfort in their race; they need to know exactly who they are, where they came from, and what their culture is. It gives them a stronger sense of belonging. But what about for those who don’t have that? Say they’re adopted, or like my parents, whose parents were all first-generation Singaporeans. My dad has never been to Hainan Island, my mother has never been to Portugal, and only recently to Sri Lanka – they have no cultural ties or loyalty to their race.

The problem most mixed people face, is wanting to identify more with one particular race while shunning, being ashamed or leaving out the other parts of them. We all know that friend who is Indian and Eurasian, but only shouts about their Eurasian heritage as though they won some genetic lucky draw. Or that friend who is 1/8th Arab, so tells people they’re Arabic and not Malay. If you’re mixed, you’re guilty of it at one point in your life.

For me it was in my adolescence. I just got more attention when I told people I was Eurasian, so Eurasian I was. It all comes from a place of insecurity and wanting to be liked. Which is what I mean when I say, I need to raise a child who likes who she is at the core of her being, regardless of what she later chooses to identify as. This goes for everything: race, sexuality, whatever.

Like I said, she’s only eight months – I have a long way to go and none of the answers. My mother raised me very strong and self-assured. I was very sure as to what was right and what was wrong. I never had an issue speaking up for myself or for others.

In Primary 1, a classmate lost a ring, so the teacher asked the Chairperson of the class to do a spot check. The Chairperson and I didn’t get along, so she told the teacher she found it in my bag. I was asked to apologise which I refused. I didn’t take it. The teacher tried everything to get me to apologise, finally resorting to threatening to call the police because I was a, “lying thief” and stealing was a crime. I assume any other seven year-old would have cracked and apologised. I didn’t, because I did not steal that ring. The Chairperson, however, got scared and finally fessed up that the ring was just on the floor.

The reason I bring up that story, is to show that even at age seven, no one could make me feel bad for something I knew I wasn’t. I said I wasn’t going to bring up the racism or prejudice that my husband and I have faced, and I won’t. But I will say that when people have made comments about my race, or not wanted to work with be because of a stereotype they believed about my race, or wanted to date me purely because of my race and nothing else – it did not diminish my worth as a person.

I am very proud to be Hainanese, though I can’t speak or understand it. I am also very proud to be Eurasian, though I have little cultural knowledge about it. If we could raise a generation that loves and values themselves above all else, we would have succeeded in raising a more loving and understanding generation, where race would be something more easily accepted. Or at the very least, would not be the sole defining factor about a person…

In conclusion, though it is good to know where you came from and what your history has been, it is arguably more important to be self-assured in spite of it all. My hope for any parent raising a mixed child is to make sure they’re proud of all their mixes. My hope for parents in general, is to raise a child that see’s race, but looks past it to the person.

How to talk to your kids about race