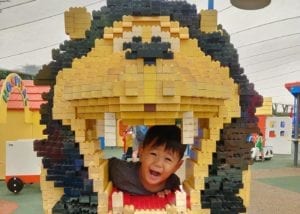 Just when you thought you were done with the terrible twos, say hello to the threenager...

Just when you thought you were in the clear and done with the nightmare that was the Terrible Twos, get ready for the new monster that is the Threenager. The Threenager is stubborn, all about risk-taking and is likely to dish out a painful insult or two just when you least expect it.

The three year old is tiny but fierce and his emotions are oh-so-big, resulting in mini ticking emotional time bombs ready to explode for the craziest of reasons. Maybe it’s because you told them it was bedtime or you refused to let them leave the house only wearing their underwear. Whatever it is, it’s enough for them to tell you that “they don’t like you anymore”. Ah, if we could only bring back the Terrible Twos… heck, we wouldn’t mind the sleep deprived newborn phase either. Maybe.

If you’re in the throes of the Threenager years, you’re not alone. We’re going through it ourselves and here’s how we’re managing so far:

By having nerves of steel

Got a dining table? Your threenager (if they haven’t already) will jump off it probably because it reminds them of the time they saw Aladdin jump off the balcony onto his magic carpet. Unlike their clunky early toddler years where their sense of balance and coordination just weren’t there, at three years old they are automatically more agile. Combine that with zero fear and you’ve got yourself a whole lot of trouble. Our solution? Expect it and deal with it when it comes. There’s no sense in pretending that it’s never going to happen.

By picking our battles

When your kids are a treasure trove of emotions, you’re bound to fight over everything. And it can be hard to keep your cool, especially if you’re already stressed out about the fight to begin with. Take a step back and choose your battles. If it’s over going to playgroup in the morning versus staying home, or wearing a Spider-Man mask to school, know when to give in and when to stand your ground. Otherwise, you’ll just be tearing your hair out everyday – trust us, we we’ve been there.

By not taking everything too seriously

At three, your not so little one will be a master at toying with your feelings. They will tell you they love you and they will also tell you when they don’t. They’ll also be the first to point out (much to our shock and horror) when they think someone is “old” and *cringe*… “fat”. Although they’re great with words, they’re not so great with the meanings attached to them yet. Instead of feeling devastated every time your threenager tells you he doesn’t love you anymore, just say: “I know you don’t mean that but I love you anyway.” This way, you’re still acknowledging their awesome albeit painful vocabulary but letting them know what their words truly mean too. By “asking for their help”

Three years old is the perfect time for kids to become more independent. Although you’ve probably been teaching your little one to do things on their own or telling them what you’re going to do, asking them for “their help” is the easiest way to get them to do what you want. This way, you’re saying that you appreciate what they’re doing and also acknowledging that your three year old is grown up enough to help out.

By holding them when they cry

As mature and independent as your three year old may seem, they still need their Mummy and Daddy to comfort them. Even after pushing their limits and proving they can do things on their own, nothing feels better than having Mummy or Daddy hold them when they’re upset. Whether it’s because they’ve fallen from the aforementioned table or refuse to wear socks, being sad and angry are two very legit feelings that we need to acknowledged.

By spelling everything out

Three year olds are all about pushing boundaries and will jump at any opportunity they have to do so. If you’re going to do something you don’t want your threenager to be involved in (like eating a sneaky bit of chocolate after dinner), just spell out what you need to do to your partner. For example: “I’m going to eat c-h-o-c-o-l-a-t-e in the bathroom really quick, OK?” Because sometimes, tantrums just aren’t worth it and it feels nice to eat our special treat in peace.

If you didn’t know this by now, yes, threenagers literally have zero chill. They don’t nap, and if they do they’re probably in their room quietly drawing a mural on the mall. It’s exhausting and super draining and you’re going to want to insist on a nap but sadly, for many of us, it just won’t happen. The solution? Wear them out during the day and get your me-time at night. Make sure your threenagers are in bed by 6.30 so that come 7pm, it’s Netflix and glass of Sauv Blanc time.

As trying as the threenager years have been so far, it’s also been great. When they aren’t being moody little beasties, they can be incredibly funny, imaginative and sweet. My threenager and I can actually have a decent conversation and we’re always trying to outdo each other with random animal facts (mostly made up). He also tells me that he loves me 300x a day and I can leave him to play on his own while I write on my laptop. I can also ask him to do things for me and I’m saving lots of money on diapers because he’s potty trained. Although I can’t say I’ll miss his meltdowns, I know I’ll miss what’s left of his toddler years – especially when he becomes an actual stinky teenager.

Sneaky (and not so sneaky) ways to get kids to eat greens!
How to deal with jealousy between siblings
When breastfeeding stops…
Raising boys to be gentlemen