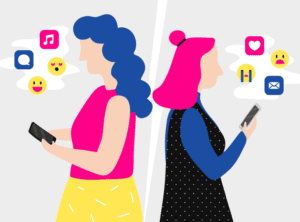 From Tumblr and WhatsApp to Twitter and Snapchat, get the lowdown on the most popular apps teens use.

We get it, kids: social media is here to stay, and no matter how many times we claim “In our day, we had to speak to each other in person to make arrangements”, we know that apps for teens aren’t going away anytime soon. Or ever. Especially when we’re all self-isolating in our own homes during this circuit breaker! And that’s why we’re trying to get on board with apps. So with the odd helpful grunt from our own awkward teenagers, we’ve come up with a guide for parents on the apps teens use in Singapore right now, and what we need to know about them.

What you need to know first

Before we jump into the weird and wacky world of social media apps teens use, there are a few things to note: these apps were made for adults by adults, so neither the apps nor the content creators will ever be held responsible for the content teens create or view. (In other words, if the teenagers get up to no good and start sending inappropriate selfies, it’s not Facebook’s fault.)

To say there’s any one app that teens use predominantly, and therefore making it easy for parents to keep an eye on (code talk for spy on), is not the case. Teenagers are a fickle lot, and in the world of social media, they tend to flock to whatever app their friends, or the popular influencers, are using. It’s an app-eat-app world out there and the watchful eyes of parents is just another factor… Good luck, mums and dads!

Still going strong, Facebook has quite the monopoly when it comes to social media and social networking apps teens use. “I’ll add you on Facebook” has replaced asking for someone’s phone number, and suffice to say most people (parents included) on the planet (wherever it isn’t banned at least) have a Facebook account. It’s easy to use (even for parents) and Facebook’s in-built messaging system is a more public platform to stay in touch with people you’ve met in real life. Although its voice and video call functions could stand to be a bit more stable, it’s a decent app with a very large bank of stickers. In an update this year, they pushed out extensions and games to play with friends.

Instagram is an image-based app that allows users to upload photos or videos and comment on or like other people’s content. Its Stories function allows users to upload videos for 24-hours before they disappear into the internet void. It also allows people to live stream to their followers and send direct messages.

Currently the world’s most popular microblogging tool for sending ‘tweets’ of no more than 280 characters long, Twitter is used for everything from sharing personal status updates to carrying out social and scientific discussions, and even for social media reporting. Celebrities and politicians can mingle among the masses and we get their hot take on what shampoo to use or get to go all judgy pants on them based on how much sugar they put in their coffee. There’s also a private messaging function. Fun fact: it’s the number one most used social media app in Japan.

The official mood board of the internet, this “home for your inspiration” is like Pinterest sans words, and populated mostly by females under the age of 24. Being an image-only sharing site, people can choose to “heart” your content or simply ignore it – there is no other option. Messages are image-based too. Unfortunately, it has no control over plagiarism or reproducing stolen images (including photos you might want to keep private!).

You have to be a gamer to use this. Just kidding, it’s the new free software that has quickly overtaken many other VoIPs (Voice over Internet Protocol, ie making calls via the Internet) like Teamspeak, Ventrillo and recently, Skype. It comes as an app, a downloadable program and is even browser-supported. What’s most impressive is its ability to host several hundred people in a group chat (and group call!) at once.

The mum vs the millennial: The social media battle

As one of the first messaging apps to replace texting (and, later, calling) on mobile, WhatsApp is still right up there and has over one billion users! Perfect for group chatting and file sharing, this app has been used worldwide since 2009 both professionally and personally.

Pitched as the fastest messaging app on the market, this cloud-based app became popular when other apps such as Kakao Talk and WhatsApp were banned in some countries. It’s popular and its definable feature is its programmable bots that do all kinds of cool things including quizzes and, recently, payment functionality. Best of all, it’s more private and secure than WhatsApp.

When the good ol’ platforms LiveJournal and MySpace died out, Tumblr took the stage. As a fully customisable blogging site, you can subscribe to a literal dashboard of content the same way you would for Twitter or Youtube by following other users. You can also ‘like’ or ‘reblog’ (share) other people’s content so that it becomes available to view on your own blog. It also implemented a real-time messaging system, in addition to its other messaging functions.

In the US, this used to be one of the biggest messaging apps teen use (before TikTok took over – more on that later). Teenagers can share stuff they don’t want to necessarily share forevermore, update stories and send photos in the knowledge that all the info will be deleted within 24 hours. It also informs you if some sneak screenshots something you post. Other plus points include ready information on celebrity events and media functions, so you can stay on top of the social buzz happening right now. And of course there are those Snapchat filters…  But now we get them on Instagram, too!

We know China isn’t very Google-friendly, neither is it on speaking terms with Facebook. However, they have messaging apps there and among them is Tencent QQ and WeChat. QQ is more popular among the Chinese-speaking community since the international version is pretty user-unfriendly. QQ itself is very handy. Not only can you send files from your phone to your computer, but you can also call, live stream from your phone, and even send money to your friends. This is the all-in-one, folks. Of course, it is in Chinese.

This popular short-form video platform is one of the biggest apps on the market, thanks to the overwhelming number of dance routines that have been popping up on the app. Since one-third of the world’s population is currently in self-isolation, there’s no better time to whip out those dancing shoes – making it 2020’s app of the year (so far). Want to hop on the TikTok train? Get started with these dances here.

Want an easy and convenient way to talk to family and friends over video chat, and play a couple of games while you’re at it? Houseparty is a great app to get started, and you can bet your teens are definitely using it to chat with their friends during this period. Plus, though it’s an app for your phone, it’s also available to use on your PC as well – how convenient!

The mum vs the millennial: Private or just privacy?

The most popular apps teens use