It’s no secret that many of us manage to juggle work, parenting, household chores and a billion other things that come as part of the ‘mum’ deal on a daily basis thanks to our extra pair of hands: our helpers (nope: not talkin’ about you, husband). These ladies really do lighten the load in so many ways, and we think it’s time we helped them more too. Word has reached us that Frog Michaels, the brains behind the fantastic bilingual cookbook, A Helping Hand: Delicious Recipes in English and Tagalog, has taken her Tagalog / English recipe bible into the classroom! Hurrah! Helpers will boost their confidence and their kitchen repertoire by trying their hand at whipping up a storm in the kitchen, all under the masterful guidance of award-winning Filipino chef, Marlon Lao. The good news doesn’t stop there either: we’re giving three lucky winners the chance to send their helpers on this awesome course –  worth $120 – AND a copy of the cookbook we’re all in love with….

The book
A Helping Hand: Delicious Recipes in English and Tagalog was launched last year to much fanfare from employers and helpers alike. The clever recipe book, written in English and Tagalog, was created to bring over 80 family-friendly recipes to our dinner table courtesy of our lovely helpers. From modern dishes to Singaporean faves, there’s something for everyone in this colourful, knowledgeable and, frankly, delicious collection.

The course
Giving our helpers extra skills and the confidence to shine is something we all aspire to, and this intro cooking course designed with helpers in mind is a win-win for sure. Hands-on classes will be running at the gorgeously swanky new Raffles Place digs of The Providore Cooking Studio, and led by the super talented Marlon Lao. The three-hour session will be conducted in Tagalog and fledgling master chefs will whip up a three-course dinner during the class, with recipes taken from A Helping Hand – a copy of which they will be bringing home to continue their culinary learning. 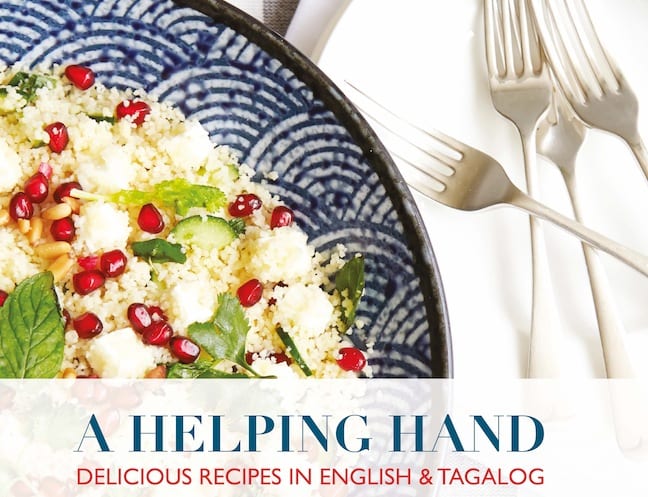 The front cover recipe
For a meal as pretty as a picture – literally – Frog has shared this tangy sweet dish with us and we think it makes the perfect lunchtime treat or dinner side dish.

Method
1. Pour the boiling water over the couscous and add the olive oil, lemon juice, salt and pepper. Cover with cling film and leave it to stand for 10 minutes, until all the liquid has been absorbed.
2. Toast the pine nuts in a dry frying pan over a low heat for 3-5 minutes or until golden. Leave to cool.3. After 10 minutes, fluff the cooked couscous with a fork, making sure it’s well mixed (this can be kept covered in the fridge until required). Just before serving, add the feta cheese, pomegranate seeds, cucumber and herbs. Toss gently and scatter with the toasted pine nuts.

Tip
To free the seeds from your pomegranate:
1. Roll the whole fruit to loosen the seeds
2. Score it around the middle and rip it open
3. Hold the halved fruit over a bowl – seed-side down – and whack the skin with the back of a wooden spoon; the seeds should shoot out. You can also try lightly squeezing the pomegranate as you tap.

THE GIVEAWAY
We’ve teamed up with Frog and the guys at The Providore Cooking Studio to give away three of these fabulous cooking classes and cookbooks, worth $120! To stand a chance to win, check out our full terms and conditions before entering your details in the form below. Our winners will be able to select a class from dates in August and September. This competition closes on 4 July, and winners will be announced here. Good luck!