We've been talking to some of the top international schools in Singapore about their foreign language programmes and why languages are so important for global success...

Parents, raise your hands if you’ve ever wished you were fluent in a second language. As adults, we are all too familiar with the advantages of being bilingual, or at least conversational in another language, and in the workplace it allows us to deal with clients in a language they are more comfortable in. A big plus when trying to seal an important deal! It’s also hugely useful when we’re jetting around the globe trying to order chicken nuggets with no spice for fussy kids… Which is where foreign language programmes in international schools sets our kids up for an easier future as global citizens!

By kids learning new languages, not only do they become more internationally minded, but they are exposed to different cultures from a young age. We spoke to several international schools who really understand how important foreign language skills are, about what sets their particular language programme apart and why they believe it will help little linguists when it comes to school and career successes in the future…

What languages are offered in your school?
CIS offers Chinese, French, Spanish (from Grade 1 onwards) and Japanese (in Grades 11 and 12 IB language and literature class only). We also have a hugely popular Chinese-English bilingual programme (from Junior Kindergarten to Grade 6) and from August 2018, we will be opening a bilingual French-English programme for students in Grades 1 and 2. A wide range of extra-curricular language classes are also available to students after school. These classes incur an additional fee and are taught by external providers. 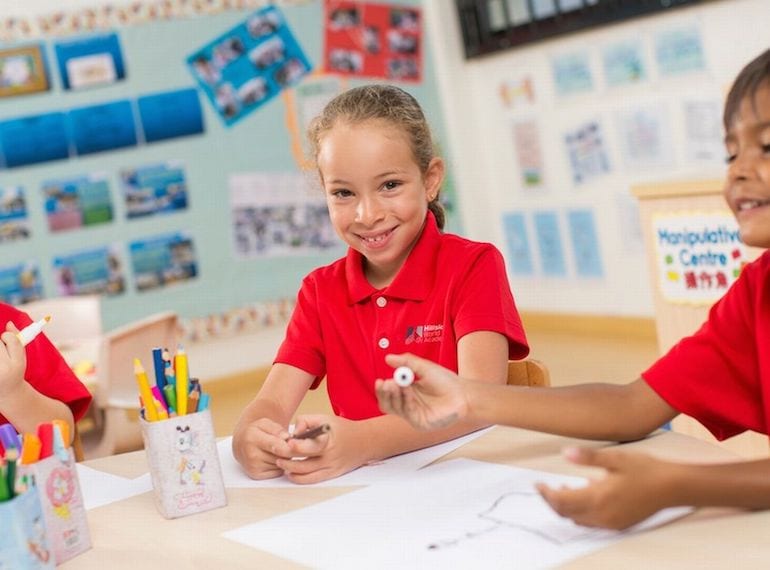 What is CIS’ approach to language learning?
We place a strong focus on creating authentic experiences where learning in school mirrors real-life activities. This helps make the learning more meaningful and motivates students to learn more. We also integrate culture into all our lessons, use a variety of authentic materials (such as tweets, Youtube videos and music), and engage students in active, hands-on activities like acting out plays and participating in quizzes.

School tip: How can parents to engage their child in language learning?

What languages are offered in your school?

What’s SAS’ approach to language learning
Peering into one of SAS’ world language classrooms, you might witness students creating an animated video in Chinese, role-playing a transaction in Spanish, or hear a debate of literary virtues in French. The real-life application of language skills is what world language in SAS is all about. No matter which language students choose, at SAS, they intersect language and culture and become well-equipped for the world as savvy citizens.

School tip: What’s your advice for how kids can learn a language at home if they don’t study that language at school?
One of the best ways to develop both language and reading skills is to read children’s books in the language you are working on, find stories children are familiar with and read them in whatever language you would like your children to learn.

What languages are offered in your school?
As​ Hillside World Academy (HWA) is a ​fully ​bilingual school​, core​​ academic subjects such as Maths and UOI are taught in equal proportions in English and Mandarin at the PYP level. ​In PYP, foreign language is considered as an extracurricular class and we offer Japanese, Korean, French, Italian and Spanish.​ Students across all levels can also opt to take English, Chinese (both in SL/HL), and Mandarin ab initio (SL) as Group 2, Foreign language acquisition. Languages provision is very important for the IBDP students, they can choose their languages (HL/SL) for subjects such as “Studies in language and literature” and “Theory of Knowledge”.

What is HWA’s approach to language learning?
Language support and learning is a very big part of the IB framework. In HWA, our focus is on being bilingual. We enhance the power of code-switching in our children, starting in the formative years. We believe that it helps boost confidence and gives a child an international mindset.

School tip: How parents can support their child’s language learning at home, especially if it’s a language they are not familiar with?
Language learning takes the form of hearing, speaking, and writing. It’s subtle ingraining, which environment builds to support this purposeful outcome. Hence, there should be different types of entertainment transmitting from radio, television programs and documentaries and easy access to books. Create a corner in the house to give the learner the chance to browse and learn.

What languages are offered in your school?
Daily French and Chinese classes throughout the Primary years inspire learners to embrace language well in advance of exam years, enabling all Nexus students to study their language of choice from Nursery through Year 13. At IB Diploma level, Spanish is also an option. To cater further for expatriate families, School Supported Self-Taught units are available in many other languages, such as German, French and Korean.

Importantly, in response to parental demand, Nexus seeks to support and encourage Mother Tongue language development, wherever there is demand in our community; currently we provide classes in Dutch, French, Japanese, Russian and Polish.

What is Nexus’ approach to language learning?

At Nexus we consider additional language acquisition to be a key priority in today’s increasingly global society; it prepares our learners for further study and the world of work, and encourages deeper social and cultural interactions. We deliberately employ staff from across the globe who are able to speak a range of languages, to help children communicate and build their confidence.

School tip: What is the best age for learning a language? Do young children really learn languages better and why?
The sooner the better! Children are at their most receptive in their earliest years. At birth, we all have the capacity to speak any language, but as time goes by, we find it increasingly difficult to comprehend and replicate the sounds we hear. Research suggests that language learning from an early age also stimulates the brain and encourages the development of problem solving attributes; watching three year olds learn French or Chinese illustrates perfectly how valuable (and fun!) language learning is.

What languages are offered in your school?
Although English is the language of instruction at GEMS World Academy (Singapore) and forms the core language programme across all courses, we support the maintenance and development of a child’s mother tongue. Our current mother tongue classes include French, Mandarin, Spanish and Japanese in Grades 1 to 10.

Foreign Language learning is a core component of being an international student and embedded into the International Baccalaureate (IB) programme philosophy. In the Early Years, all students undertake daily Mandarin lessons. From Grade 1 onwards, students have the option of continuing Mandarin, or undertaking classes in Spanish or French. We also offer English as an Additional Language support programme, which focuses upon functional language development across listening, speaking and writing for non-English speaking students.

What’s GEMS (Singapore)’s approach to Language learning?
Acquisition of more than one language enriches personal development and helps facilitate international-mindedness. Every student benefits from having access to different languages, and this is especially useful in understanding different cultures and perspectives. GEMS (Singapore) is proud of its passionate teachers who help to motivate and inspire the students to learn a new language and make it fun too.

School tip: How does a parent decide which language is best for their child to study?
Choosing a foreign language for your child might be a difficult task. Here are some tips you could consider when making the decision:

How schools are making science learning fun (plus experiments!)
International or local school? One family with kids in both systems
To IB or not to IB? Experts break it down
Five international school share their approach to bilingual education