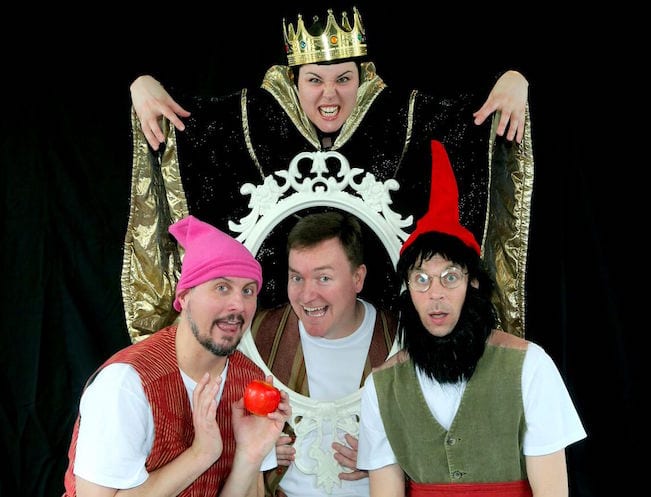 We loved DuffleBag Theatre's hilarious take on Snow White, which was just perfect for kids. The production kicked off the Act3i International Festival for Children. Don't miss the rest of the great shows in the festival lineup!

This hilarious take on a classic fairy tale was a huge hit with the kids and a taste of what's in store at the Act3i International Festival for Children.

We hit the ACT 3i Festival for Children on opening weekend to check out ‘nearly world famous’ DuffleBag Theatre’s performance of family favourite fairy tale, Snow White. Beware the poison apple! Our junior thespians were on the edge of their seat one moment, rolling with laughter the next, and up on stage by the end of this fun-fest! Here’s why it was the best 60 minutes we’ve spent as a family this year:

From the moment the lights went up on this sharply written original screenplay, it was obvious this wasn’t going to be your average rendition of Snow White. The seriously talented Canadian cast needed little more than a curtain, a treasure box of props and an audience of plucky kids keen to get in on the action. There’s just something about improv that makes your heart thump with excitement! Snow White herself was played by a cute eight year old theatre-goer, the dwarves hi-hoed to work (and a coffee break), and the very convincing prince’s marriage proposal was rejected in favour of a Facebook friendship. How very 2016!

The slapstick, fast-paced humour was tears-rolling-down-your-face kind of funny. The best bit? Watching our kids cracking up with laughter!

Cleverly created especially for four to eight year olds, the storyline and jokes kept the young audience enthralled from beginning to end. Our seven year old was totally into the Justin Bieber and Adele (Hello) references, and happily re-counted her favourite scenes on the trip home.

It’s in an awesome location

The ACT 3i Festival for Children is being held on level three of the centrally located National Library. Not only is there a great café onsite serving barista coffee, ice cream and baked treats, you can also head to the Children’s library afterwards to read a book or two.

We’re looking forward to catching more shows at the ACT 3i Festival for Children this week – don’t miss your chance to snap up tickets, and check out our review of Marmalade, an elegant circus performance for toddlers, which is now showing!