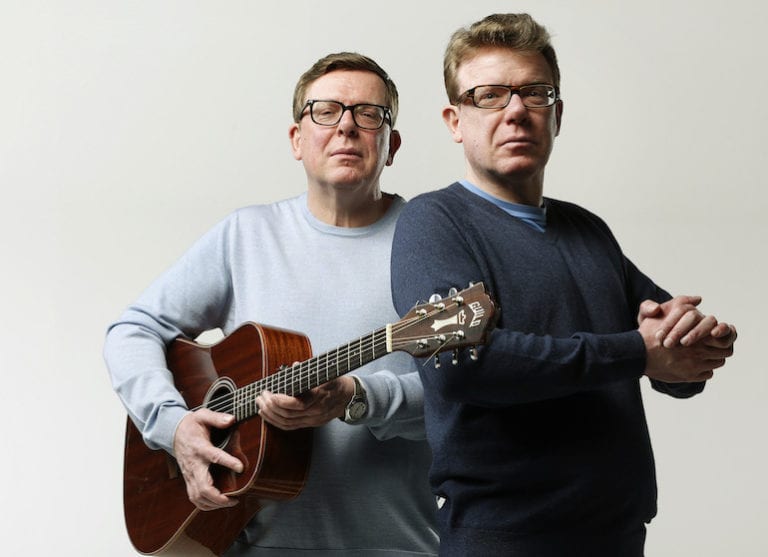 Did we walk 500 miles to interview The Proclaimers? No, we did not. But we did get their take on Singapore, Brexit and music streaming...

We’ve interviewed some pretty cool parents in our time here at HoneyKids, including Brit TV star, Andy Day, and local acting legend, Joanne Peh, and now we’ve got another uber cool parent interview in the bag: singing sensation, The Proclaimers. We recently caught up with one half of the identical twin duo, Craig Reid, ahead of their return to the stage here in Singapore this coming Monday, and here’s what he had to tell us about Scottish independence, ‘that’ song, his very talented daughter and his famous friends…

You guys have been performing for over 30 years. What’s the secret to your long-term success?

I think the one thing is we still WANT to do it. We still write songs and make records, and we still love playing live. We definitely still have a strong desire to keep doing what we’re doing, and I think this comes across to our audience. We love what we do!

And the fans that come to see you: are they generally fans who have been with you all along, or are you still picking up younger generations along the way?

I think it’s a mix: there’s definitely people who have been with us since 1987, and now they’ve played our music to their kids and grandkids, so we’ve picked up younger fans along the way. We’ve also picked up new fans – older and younger – because of the TV shows, movies and musicals we’ve been involved in such as Family Guy, Shrek and Sunshine On Leith. That definitely helped to build our fan base.

Also playing festivals in front of an audience who aren’t necessarily there to see us, but discover us by default helps too. The festivals will usually have a lot of young people there, but often families too, and we tend to appeal to fans of all ages which helps us keep going for sure. No two festivals are ever the same, and we love doing them.

Do you think you’ll ever retire?

We’ve no plans to retire, and we turned 57 earlier this month. I’ll be honest though: while the actual playing and performing isn’t getting any harder, the travelling part of touring definitely takes more of a toll these days. It takes us longer to recover, and I guess, eventually, we will retire. We certainly don’t have any plans at the moment to throw the towel in, but we are aware that we need to keep an eye on ourselves, and to consider that we are still doing ourselves justice.

How has music streaming affected the industry? Do you think we have moved away from the era of buying albums in favour of singles?

I honestly think that in this day and age a lot of younger people don’t really think that they should be paying for music. This has definitely affected record sales not just for us, but for every act. It’s worse for singers and bands who have only come through in the last few years, especially if they arrived in the limelight since streaming became so prevalent. When we first started making albums, record sales were high and people were happy to buy vinyl, and after that, CDs. But that trend has given way to downloading and streaming, and it’s difficult for younger acts coming through to make money from music, unless they’re playing live in front of good sized audiences. It must be pretty tough. There’s not much money to be made in the music business from streaming, and I do hope that it will eventually get better.

You and Charlie are twins and share the same musical talents, but we know that your daughter, Roseanne, is also very talented. How do you feel about her going into the business?

I am happy she’s doing what she wants to do and to be honest she’s never had any encouragement or discouragement from me. All I said to her was that if she wanted to do it, she would have to give it everything she’s got, and to work as hard as she can. She’s done that, and she’s got her first album and first record coming out in April! She’s done it on her own terms, and is making music for an audience very different to ours. She’s definitely making music for the right reasons, and if you like country music, then you’ll love Roseanne.

It’s not just Roseanne from our family who has gone on to make music either. Charlie’s son, Michael, is the drummer in a band called Man of Moon, a rock band. They’ve been performing for a couple of years now and are getting good reviews on their circuit. They’ve been on a few tours, and he’s certainly very talented.

What has been the most memorable compliment you’ve ever received from another celeb?

The one that springs to mind is when we did the V Festival in Chelmsford, UK. David Tenant is a fan of ours, and around 10 years ago we did a set for half an hour on the main stage, which David introduced. In his introduction he said “And next up, The Proclaimers, the best band in the world!” We walked on and I did say, “Well, the best band in the world couldn’t make it, so you’ll have to make do with us.” It was a lovely thing for him to say. David himself is not only a very talented man, but also a very nice man too.

You’ve always been vocal about your political views, especially when it comes to the Scottish Independence Movement. Do you ever get into trouble for your views?

No, I don’t think so as we’ve always been open about our views on that, and when we started having some fame back in the 1980s, the prospect of Scottish independence was very, very dim. It’s become a distinct possibility since then, and could definitely happen one day. I think that for people who are interested in politics, they know where we stand. We’ve been quite outspoken about it for over 30 years, so it’s not a new thing with us.

And dare we mention it: Brexit? What’s your take?

I think it’s an absolute disaster, and is a massive mistake. Is it even going to happen? My suspicion is that eventually there will be a deal cobbled together and there will be some kind of Brexit, but it will end up satisfying no one. It really is one of the biggest mistakes I’ve ever seen.

You’re coming to Singapore in April as part of your tour, and we know you’ve been here before for the 2012 F1 (we saw you!). What do you love most about Singapore?

I think it’s a very welcoming place for sure. I love that it’s high tech and that things just work so well. It’s also great that it’s such a harmoniously multi-ethnic society: that’s definitely a good thing. Singapore has absolutely thrived since its independence and, showing my age here, I remember when it happened. Of course there was gloom and doom prophecies in the newspapers, but becoming independent has been amazing for Singapore. It’s a truly fantastic place.

I have to admit though, I’m not too keen on the humidity! When we did our second show at the F1, we were scheduled to play exactly for an hour in the countdown to the race, but after five minutes I thought to myself, “I am not going to be able to do this!” I managed to struggle through, but the humidity really did get to me. Luckily when we are playing in Singapore this time around, it’s going to be indoors with aircon!

Have you tried any of our local food?

Sadly we ran out of time last time we were here. It was all sound checks and shows, so we got to see and eat very little. This time around I would love to try more.

If we had to make a time capsule and put one Proclaimers song in it, which one do you think it should be and why?

If I had to say one then it would be ‘Sunshine on Leith’. It’s my favourite for sure.

What inspired you to write ‘I’m Gonna Be’ ?

It actually came to me while waiting to travel to a Proclaimers concert in Aberdeen back in 1987. I was at my piano and I just started wondering how many steps it would be to a nearby classroom, which I reckoned to be about 83. I literally wrote the whole thing in around 45 minutes, and I had no idea how popular it would become.

And do people sing it at you all the time?

ALL the time. Yes.

As children we moved around a bit and we were born in Edinburgh and lived there until 1969, when mum and dad decided they wanted to move to Cornwall. The whole family loved it down there, but my parents missed Scotland so we came back to Edinburgh when we were 10 years old. We’ve been living in Scotland ever since.

Thanks, Craig, and we look forward to taking you for a bowl of laksa in April!

If you would like to see The Proclaimers live here in Singapore, you can catch them at the Capitol Theatre on 29 April 2019. You won’t have to walk 500 miles to seem them… #sorrynotsorry