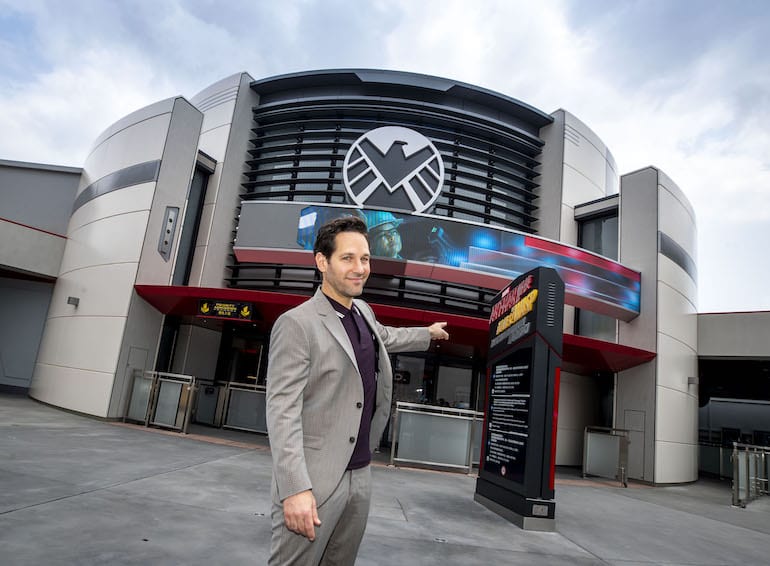 Oh yes we did rub shoulders with Ant-Man himself!

Ant-Man and The Wasp: Nano Battle! has landed at Hong Kong Disneyland and we were there for its grand opening (rubbing shoulders with Paul Rudd)

If you have a family of mini-adventurers, and you love getting away for a quick break whenever you can, then the all-new Marvel experience at Hong Kong Disneyland will be right up your fun-packed street. Hold onto your hats (literally), people, for the brand new, super duper Ant-Man and The Wasp: Nano Battle! Yep, it was with much fanfare (we were there along with Ant-Man himself, Paul Rudd) that this immersive ride rolled into action in the latest superhero-themed attraction to hit Hong Kong, and we got a sneaky peek before it opened to the public at the end of March…

What’s it all about?

Ant-Man and The Wasp: Nano Battle! is an interactive adventure where the whole fam will not only love blasting nano-sized bad guys into oblivion in a quest to save Hong Kong, but will also be ‘shrunk’ down to Ant-Man and The Wasp proportions for this action-packed experience. The mission? Pulverising the Swarmbot baddies and preventing top-secret S.H.I.E.L.D data from falling into the hands of terrorist organisation, Hyrda and its super villain, Armin Zola. Did you get all that? No: we didn’t either. So, in a nutshell for us clueless parent types, you’ll get into a S.H.I.E.L.D combat vehicle, get shrunk down to the size of an ant (pretend only, don’t panic) and then shoot a gazillion swarming things with your laser blaster to save Hong Kong from being taken over by a heinous bad bloke.

What did we love about it?

Well aside from actually hanging out with Ant-Man himself (Paul Rudd: be still our beating hearts), we were pretty hyped about getting to blast things with a laser, being shrunk (way better than a diet), and finding out that the ride features not one, but two kick-ass female leads with The Wasp (Evangeline Lily) and Leslie Lam (Jessica Hsuan) being key players along the ride’s adventure.

As parents we all know that being in a long queue with kids is, well, sucky, so a round of applause please to the people responsible for making sure the fam is entertained while standing in line. Riders will see plenty of video action featuring Iron Man, Ant-Man, The Wasp and Leslie Lam who set the scene and storyline for the upcoming battle with Armin Zola and his army of nasties.

The queue will also bring you through the Weapons Room for a peek at seriously cool memorabilia from Marvel movies, comics and TV shows. Make sure you have your camera at the ready: your inner geek WILL be unleashed for sure. And then, voila: it’s time for the ride and you hardly noticed you queued at all. #parentingwin Your guide to the perfect Hong Kong Disneyland holiday!

What did Paul Rudd have to say about it?

The man did not disappoint with the charming story of his kids’ reaction to the news of Ant-Man and The Wasp: Nano Battle! He told us that his two kids were not at all impressed with him being either a superhero or an Avenger, but by becoming an actual ride in a Disneyland? Finally he is deemed to be cool.