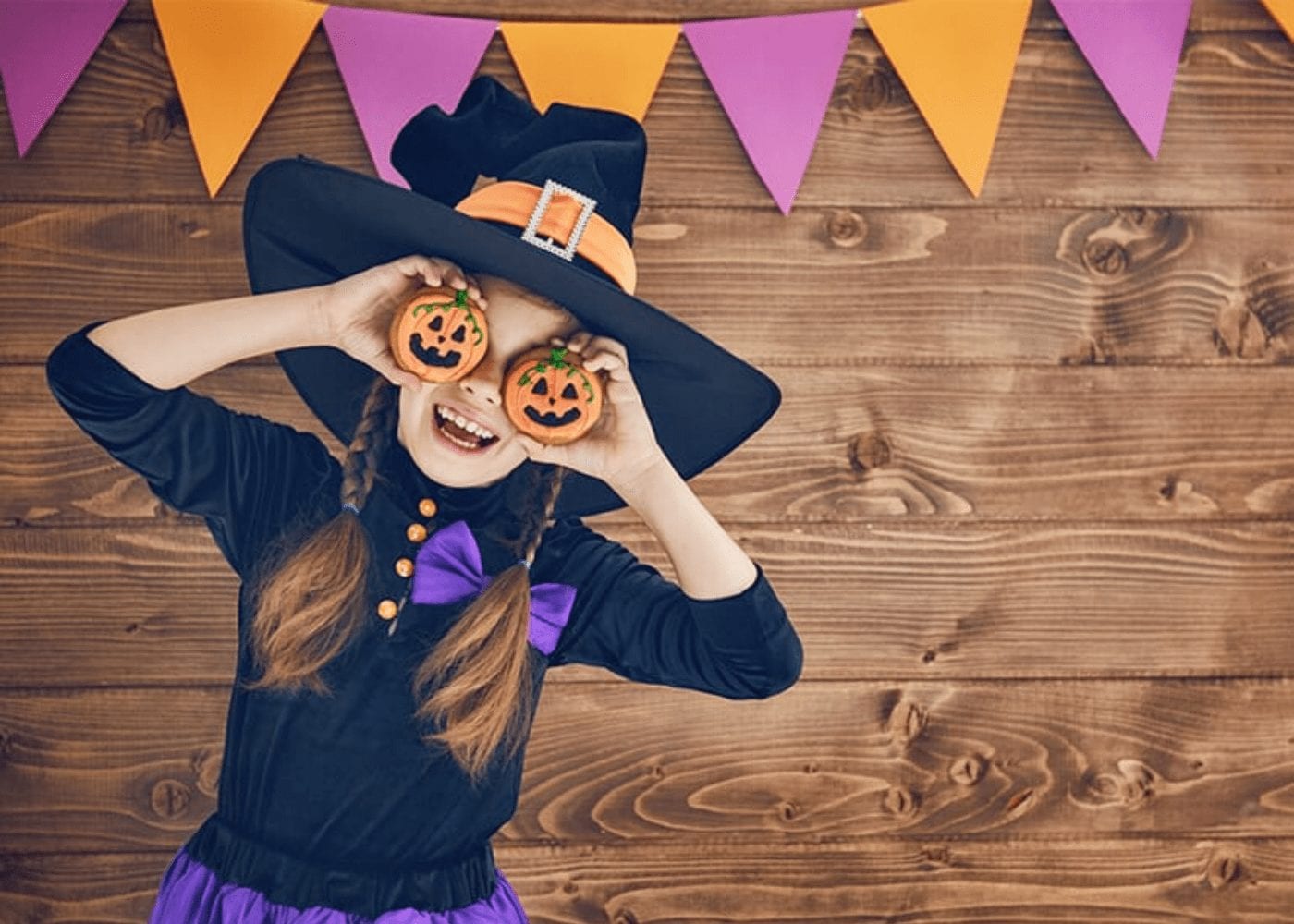 We unlock the mysteries behind the weird and wonderful traditions of Halloween...

It’s Halloween TODAY and we’re turning our minds to all the Halloween goodies filling Singapore’s supermarkets and reminding our own little beasts that it’s time to get their scary costumes on. But why do we celebrate Halloween in Singapore and around the world, and where does the trick or treating tradition stem from? And what’s with the pumpkins (if you don’t have one, try our DIY pineapple lantern tutorial!)? We’ve pulled from our bubbling cauldron the story of how it all began, and 10 skele-fun Halloween facts about the spookiest date of the year…

Ask people where they think Halloween came from, and most will probably say America. Wrong! Halloween, or Samhain as it was originally known, is actually as Irish as St. Patrick’s Day! Around 2,000 years ago (before even we were born, kids), the Celts believed that the barrier between our world and the underworld became super thin every year on 31 October. As such the weird, spine-chilling and downright evil entities were able to break through to our realm and cause havoc. But those Celts weren’t going to just let the ghouls loose willy-nilly with their mayhem: they built huge bonfires made from crops and (look away now if you are squeamish) animals (which is where the name bonfire came from: it was originally bone-fire). During the celebration, the Celts would disguise themselves as scary ghouls by wearing animal heads and skins (we suggest you try our guide to Halloween costumes rather than going down this route) and scare the real hellraisers away. When the merriment was done with, ashes from the sacred bonfires would be used to light hearth fires in homes to help protect families during the coming winter.

Samhain became All Hallows Eve once Christianity evolved, when missionaries were busy trying to change the religious beliefs of the Celtic people, who were now re-branded as devil-worshippers by Christians. In an attempt to wipe out the Celtic pagan holidays, Pope Gregory the First started converting festivities such as Samhain into holy Christian days. The 1st of November became All Saints Day (or All Hallows Day), and so the 31st of October became All Hallows Eve. You can see where we’re going with this.

While the date remained synonymous with the wandering dead, traditions such as the bone-fires and making sacrifices gave way to appeasing fiends from beyond the grave with food and gifts, left outside the door. And voila: the day became the celebration we recognise today as a large dose of creepy and a big dash of candy.

1. Pumpkins seem to be eye-wateringly expensive here in Singapore, so we already swapped that tradition out for pineapple Jack O’Lanterns way back. But the first lanterns were actually made from turnips, potatoes or beetroots! All thanks to a fellow named Stingy Jack who didn’t like to part with his coin and had a thing for playing tricks, including on the Devil himself. But the Devil got his vengeance when Stingy Jack was thrown from the gates of heaven upon his death, and the Devil wouldn’t let him into hell either. Instead, he threw Jack an ember from hell to light Jack’s way, and as Jack had a turnip with him (handily), he hollowed it out and placed the ember inside. From then until now Stingy Jack roams the earth with no resting place, lighting his way with his Jack O’Lantern. Irish immigrants began using pumpkins when they discovered them in America, and quickly realised they were bigger and easier to carve than turnips or spuds. And clearly not as expensive as they are here.

2. Halloween as we know it was also influenced by the ancient Roman festival Pomona, which celebrated the harvest goddess of the same name. Customs and games often involved apples and nuts, and is where the ‘bobbing apple’ game came from.

3. Trick-or-treating evolved from the ancient tradition of putting out treats and food to placate the ghouls and spirits who roamed the streets back in the ‘olden times’. Trick or treating, as we know it today, was first documented in the USA in 1927, and since then has gone on to become the second highest-grossing commercial holiday after Christmas in America – $9 billion was spent on Halloween in the States in 2018!

4. Orange and black are generally the colours most associated with Halloween. Orange is for the autumn harvest, while black is associated with darkness and death. Also, did you know there is no word in the English language that rhymes with orange?

5. Forget Tinder: if you’re single around Halloween then this was traditionally the day to find your soulmate! Fortune-telling games were a big part of the celebrations back in Ireland, and the day is still considered a great day to search for a sweetheart.

6. Probably best to dust for cobwebs before Halloween: if you see a spider on this night it is most likely the spirit of a dead loved one come to watch over you. 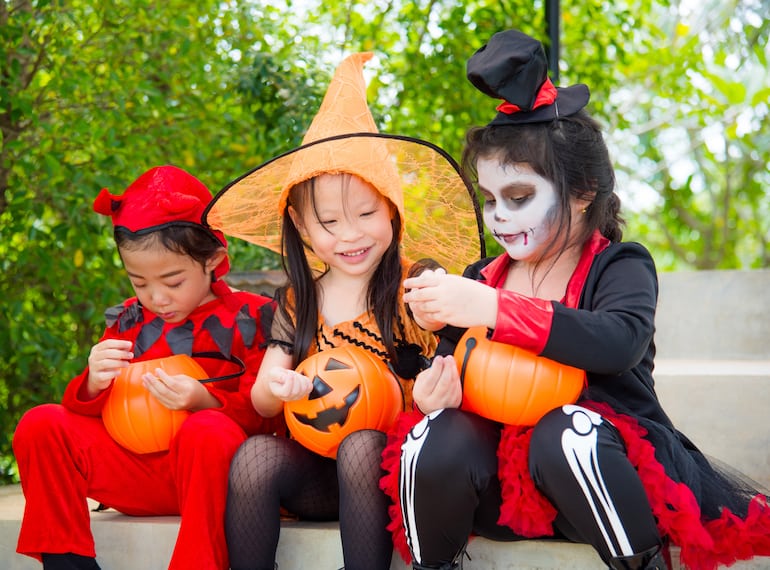 Where to get fiendishly good Halloween costumes!

7. The use of witches and cats (together with ghosts) as part of the Halloween festivities originated with the Druids, who believed that all manner of supernatural spooks – witches included – were out to get the ‘normal folk’ on Halloween night. And black cats? They got bad press back in the dark ages as actually being evil humans who had been changed into felines as punishment for their dastardly deeds.

8. We’ve already compiled our list of scary but not too scary movies for Halloween with the kids, but who among us has been outright terrified by the original 1978 Halloween movie? Apparently its budget was even more frightening than the film: just US$325,000! Savings were made wherever they could be made, and that iconic mask Michael Meyers wears is actually a mask originally used by William Shatner in Star Trek!

9. According to recent reports, the most popular Halloween costumes for 2018, based on Google searches, are Fornite characters, Mal and her friends from Descendants, unicorns and 80s fashion. Looks like the 80s are making a comeback!

10. Bagging your treats never used to be so easy. The inspiration for modern trick or treating is believed to have come from the European tradition of ‘mumming’. If you wanted your goodies you would be expected to wear a costume, play songs and dance in return for treats.

So there you have it! You can now officially claim to know all there is to know about Halloween.